Diaspora stories: Kenyan who does telephone Onion farming from the US 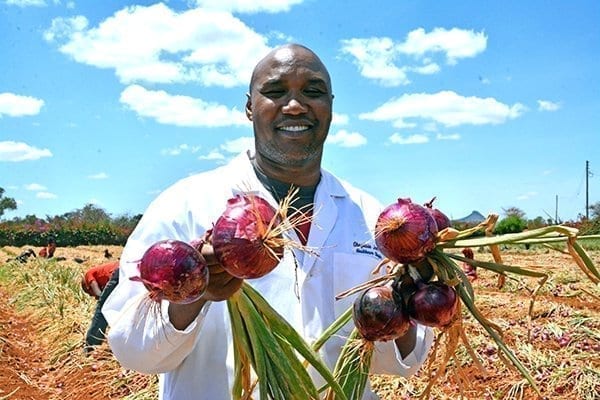 Standing in one of the furrows of his onion farm in Maili Tisa, Kajiado County, while checking on his farm workers as they harvest the crop, Joseph Oloimooja is cheerful.

It is barely six months since he harvested 18,000kg of bulb onions from an acre of his farm, which he sold at Sh75 a kilo.

And now he’s expecting yet another bumper harvest of the crop from five acres.

In a world where farmers, especially those farming from far, are always complaining of dishonest workers, few dare farm from far.

But not for Oloimooja, who does telephone farming from the US.

The career pastor, whose official name is Rev Oloimooja, lives and works in Los Angeles in the US with his family. He was in the country recently.

He went into onion farming at the beginning of the year, starting with an acre.

“I started with an acre to test the waters, luckily, there was huge demand for the commodity in the markets at the time enabling me to sell at Sh75 a kilo.”

He further grows managu and spinach separately, also under drip irrigation, that his workers sell at Namanga market.

Oloimooja went to the US about two decades ago to pursue a master’s degree in theology and he is currently in-charge of a congregation at the Good Shepherd Episcopal Church in the Leimert Park, Los Angeles diocese.

The Man of God said he decided to venture into onion farming to create employment and make use of his vast land that was lying idle.

“I once came home and saw that we were importing plenty of onions from Tanzanian farmers yet we have plenty of land and the same climatic conditions. This challenged me,” says the pastor, who ploughed Sh1.3 million in the business, with the bulk being used in drilling a borehole.

Onions from Tanzania have for years dominated the local market because they are produced in large-scale, which enables farmers to make profits even when they sell at lower prices. Second, the onions are of high quality and have longer shelf-life because they are well-cured.

To begin, Oloimooja says he consulted a soil expert who tested the soil on his farm and gave his onion project a go-ahead.

He then contracted an agronomist who took him through the steps of growing onions for high quality bulbs.

The onions are first planted in the seedbed before they are transplanted.

During transplanting, he uses animal manure and NPK 23:23:23 fertiliser to enrich the soil, says the pastor, who has a borehole from which he draws water that he uses to irrigate his onions of the Neptune variety.

Charles Munuo, the farm manager, says they spray foliar feeds on the onions besides using different pesticide to control pests such as thrips.

Rev Oloimooja’s farm manager, Charles Munuo in the farm in Kajiado. According to him, they spray foliar feeds on the onions besides using different pesticide to control pests such as thrips. PHOTO | LEOPOLD OBI | NMG
“We keep changing pesticides to stop pests from developing resistance due to prolonged use of one particular chemicals,” Munuo said.

When the onions are two-and-half months, they remove the soil around the roots to expose the bulb. Then, two weeks before the crops are harvested, irrigation is stopped to enable them dry, which is what is called curing, Oloimooja explains.

“When onions are harvested while still under irrigation, they start sprouting overnight, which makes them lose weight and market,” he adds.

According to him, many farmers harvest onions when they are not cured hoping that they will make money when the produce is weighed.

“Well, this might work for some but not for long because if you don’t cure the onions, they will regrow and the customer will ditch your produce,” the farmer points out.

Since he lives abroad, scouting for the ideal market early enough is crucial to avoid unnecessary inconveniences.

“I begin prompting potential buyers on social media informing them that my produce will be ready in about 120 days,” explains the farmer, who is now expecting some 90,000kg of bulb onions from the five acres.

So, how does he manage to farm over the phone from that far? “Initially, I had employed my relatives but having fallen victim to rip-offs, I changed tack. I have now employed people who are not related to me after through vetting,” he says.

According to him, involving family or relatives in managing one’s business is tricky.

“Most of them will try to take advantage of you, diverting money you send them for your projects to pursue their own developments. Later when you realise, you can’t fight them back because they are family.”

Social media app WhatsApp has been key in helping him stay in touch with his workers, and knowing the happenings on the farm in real-time.

To curb workers’ restlessness, all his 15 farmhands and their families stay on the farm.

“I also have the overall farm manager and operations manager to coordinate the workers. I also take good care of my workers so that they feel appreciated.”

The agronomist visits the farm twice a month or if need be to inspect the crop and recommend pesticides to be used.

“This enables me to plan in term of pesticides needed. The farm manager also keeps records that I peruse now and then over the phone,” he said.

The reverend here showcases his onion harvest. The Man of God says he decided to venture into onion farming to create employment and make use of his vast land that was lying idle. PHOTO | LEOPOLD OBI | NMG
He now plans to turn about 200 acres in the rural village into an onion farm.

Carol Mutua, a crop expert at Egerton’s University Department of Crops, Horticulture and Soils, says that high yields and best quality bulbs are obtained in areas above 1,000m above sea level.

“Reasonable crops may be realised at lower altitudes sometimes. Irrigation is only done when the crop is grown under insufficient rainfall. If practised, irrigation should be stopped two to three weeks before harvesting to give the bulbs time to cure,” she says, advising that the necks of the onions should be bent as soon as tips of leaves begin to turn yellow to make bulbs have a smooth closure and minimise thick necks.

Fertiliser application for onions should start by first week after transplanting, with an NPK regime for establishment of the crop.

40 per cent of the N, and K as well as calcium requirements should then be applied by the 3rd-4th week during the first top- dress.

The second top-dressing should then be done at the bulbing stage, supplying the rest of the nutrient needs.

Calcium and boron are critical in ensuring a longer shelf-life and preventing rots in the bulbs.

Onions prefer a nitrate form of nitrogen as opposed to ammonium forms for better bulb size and weight.

Atlanta Diaspora Entrepreneurs of the year 2013