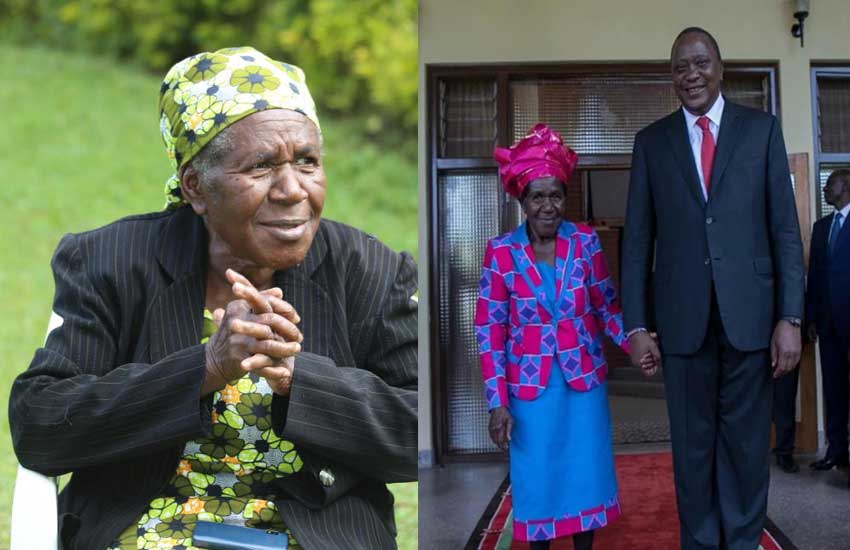 VIDEO: President Uhuru Kenyatta finally reunited with the midwife who helped his mother, Mama Ngina Kenyatta, give birth to him.

The two met at Kakamega State Lodge last Saturday after Mashujaa Day celebrations at Bukhungu Stadium. The midwife had also attended the celebrations.

Longed to see the baby

Mrs Shibonje, who thereafter longed to see ‘baby’ Uhuru, has had to wait for 56 long years to meet him, now as President.

As the two shook hands, one could clearly see a strong bond.

Uhuru and Shibonje conversed for about 20 minutes in the presence of First Lady Margaret Kenyatta, Deputy President William Ruto and his wife Rachel and Senate Speaker Kenneth Lusaka.

In an interview with The Standard yesterday, Shibonje declined to disclose what they discussed. But like the biblical Simeon upon seeing baby Jesus, Shibonje yesterday proclaimed: “Finally, I have seen Uhuru with my own eyes, and now I can rest peacefully”.

Memories of October 26, 1961, are fresh in Shibonje’s mind. Shibonje, a mother of seven children and grandmother to 16, remembers a pregnant woman disembarking from a VIP lift at about 11 am. The woman, she says, accompanied by two men, arrived at the maternity wing on the third floor, where she was working.

“I was humbled and at the same time afraid after learning that the woman was the First Lady of the Republic of Kenya. That was after I was informed by the hospital management. The two men were first President Jomo Kenyatta and Jaramogi Oginga Odinga, a family friend,” said Shibonje.

She added: “I have only been seeing Mama Ngina and Uhuru on television and in newspapers. I told the President that he should strive to improve the welfare of nurses as a way of appreciating me. It is unfair to pay nurses with certificate, diploma and degree qualifications the same dues.”

Shibonje said she helped Mama Ngina into the delivery room where Kenyatta and Jaramogi discussed politics in low tones. Uhuru was delivered at about 3 pm.

“My client delivered a bouncing baby boy. I was overjoyed when I held the baby. I separated him from his mother and did all the required duties to ensure he was safe before returning to his mother to perform the remaining part of the midwifery exercise,” she said.

Shibonje said another nurse, Naomi Muthoni, and Dr Joshi, a gynaecologist, helped her to ensure she delivered in a conducive environment. Uhuru and his mother were discharged after five days.

Since then, she has never had a chance to meet the President or any of his close relatives.

“Whenever I see him on television screens, memories of the day I witnessed his birth flood my mind. As a mother, I have been hoping that one day I will get the opportunity to meet him and shake his hand,” Shibonje said.

She says one night in May last year, while in deep slumber, she heard a voice telling her: “Fredah, Uhuru Kenyatta will be the next President”.

But she could not get an opportunity to share her dream with Uhuru. She, however, told the dream to her church members and close relatives.

Besides Mama Ngina, the nurse attended to wives of senior politicians such as James Gichuru and John Michuki at the Aga Khan Hospital.

She graduated with a certificate in midwifery from Pumwani Maternity Training College in 1960 and immediately got a job at Agha Khan Hospital.

She went to Britain for further studies. When she returned in 1970 she was deployed to Kakamega Provincial Hospital, where she worked until her retirement in 1993.

Under ‘Kenyan Time,’ You’re Expected To Arrive … Oh, Whenever