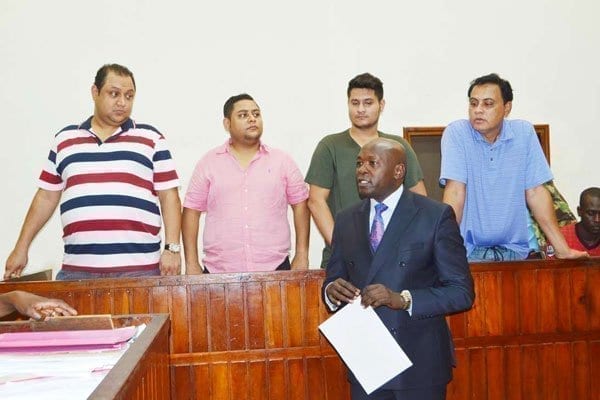 Kenyan judges, prosecutors and law enforcement officers, accused of receiving hundreds of thousands of dollars in bribes from the Ibrahim Akasha crime family to frustrate their extradition to the United States to face drug charges, are at risk of indictment and prosecution on American soil.

Top officials in Kenyan legal circles are also hoping that the Americans have cracked the drug dealers and that they will provide information on their associates in politics and government.

Already, politician Stanley Livondo is named in court documents as an associate of a South African described in court papers as a drug dealer.

US prosecutors said on Thursday that the brothers could receive sentences of life imprisonment following their plea of guilty on charges of conspiring to smuggle narcotics into the United States.

Baktash and Ibrahim Akasha could also be given 20-year sentences in a US prison for obstructing justice. That crime involved bribes they paid to Kenyan officials in an attempt to avoid extradition to the US.

Goswami sold us out say Akasha Lawyer-Complaining about…

Why I wept in court, criminal lawyer Cliff Ombeta spills the…

The brothers are scheduled to be sentenced by presiding Judge Victor Marrero on February 1, 2019. The judge has the authority to impose whatever sentences he sees fit.

In announcing the success of the US government’s case, the chief federal prosecutor in New York, Geoffrey Berman, described Baktash and Ibrahim as, respectively, the leader and deputy of a highly lucrative international drug ring.

“Not only did they manufacture and distribute narcotics for over two decades, they kidnapped, beat, and murdered others who posed a threat to their enterprise,” Mr Berman said.

“When the brothers encountered legal interference, they bribed Kenyan officials — including judges, prosecutors and law enforcement officers — in an effort to avoid facing the charges against them in the United States.”

Prosecutors also elaborated on allegations they had earlier made linking the Akashas to violence, including murder, carried out against rival drug smugglers.

The Akashas are now said to have engaged in a confrontation in a Mombasa shopping mall in 2014 with Mr Livondo, who is described as an associate of David Armstrong, a South African drug trafficker.

Ibrahim Akasha is said to have threatened Mr Livondo with a pistol during this public altercation in the mall.

The brothers also “helped orchestrate” the murder of another Armstrong associate, a man identified only as “Pinky,” US prosecutors added.

This individual was shot 32 times in the street in South Africa, according to the accounting presented yesterday.

A strong case built by US prosecutors is the likely reason the Akasha brothers chose not to stand trial on drug-trafficking and other charges and instead pleaded guilty on Wednesday.

Prosecutors and defence attorneys did not respond to queries as to whether Baktash Akasha and Ibrahim Akasha made a deal in return for their guilty plea.

The prosecution may have agreed to ask presiding Judge Marrero to impose sentences of less than life imprisonment in exchange for sparing the US the cost of a full jury trial.

It is also possible that the Akashas have agreed to provide prosecutors with incriminating information, such as details of the bribes they are said to have paid Kenyan officials.

Prosecutors say in court documents that the Akashas had conspired to pay “hundreds of thousands of dollars in bribes to the judges, prosecutors and law enforcement officials” in Kenya in an attempt to avoid extradition to the US.

Baktash and Ibrahim had “instructed relatives to transmit drug proceeds through underground currency networks so the funds could be made available for bribes,” the US prosecutors stated.

Any defence mounted by the Akashas’ trial attorneys would likely have been badly damaged by testimony for the prosecution that was expected to be presented by one of their alleged co-conspirators, India national Vijaygiri Anandgiri Goswami.

Described by US prosecutors as the manager of the Akashas’ drug trafficking network, Goswami was indicted in New York along with the brothers.

He apparently agreed earlier this year, however, to co-operate with prosecutors in building a case against the Akashas.

Lawyers representing the US government would not confirm that Goswami had been “flipped” to give evidence against the brothers.

But recent court documents make reference to information to be provided at trial by an individual identified as “co-operating witness-1 (CW-1)”. A defence attorney for Baktash who subsequently removed himself from involvement in the case told the Nation a few months ago that Goswami had agreed to co-operate with the prosecution.

Goswami is also cited in court papers as having discussed the Akasha network’s drug smuggling plans with an undercover US narcotics enforcement agent.

The defendants had been led to believe that the secret US agent was a Colombia drug smuggler who would help arrange for a shipment of 98 kilos of heroin to the US.

The Akashas and Goswami held a series of meetings with the undercover agent in Mombasa and Nairobi over the course of eight months in 2014 and also spoke several times by telephone with this disguised US source.

The face-to-face discussions were secretly videotaped and audio-taped, and the phone conversations recorded.

It would have been exceedingly difficult for Akasha defence attorneys to persuade a trial jury to ignore this evidence.