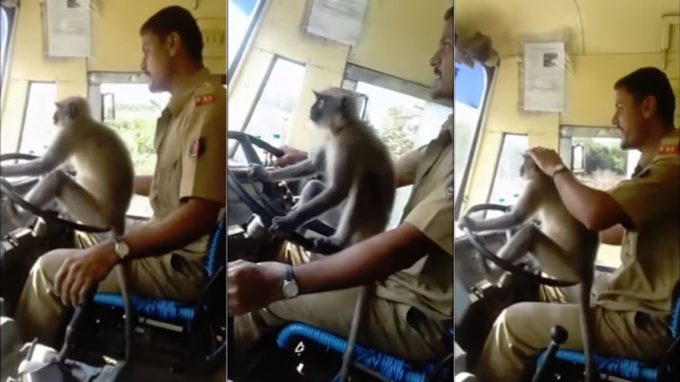 A bus driver in India has been suspended after a video footage showing how he let a monkey to drive the bus emerged.

In the footage, a languor monkey can be seen sitting on the driver’s lap and appearing to be steering the bus as it sped along a highway in Southern Karnataka State of India.

According to witnesses quoted, the tamed primate boarded the bus with a passenger before insisting on joining the driver.

The driver, identified as M Prakasha, seemed unconcerned with the monkeys’ business as it steers the wheel. Same case was with the passengers who were on board, seemingly enjoying the spectacle and appeared to encourage the driver to carry on rather than complain.

The primate is said to have taken charge of the wheel for few minutes before bouncing off with its owner after arriving its destination.

After the video went viral, Karnataka State Road Transport Service is said to have suspended the driver forthwith after the incident said to have happened on Monday.

The bus company is also said to have issued a statement confirming the suspension of Mr Prakasha.

“We have removed the driver from duty and have asked the divisional security inspector to conduct an inquiry. He won’t be assigned further duty until the probe is completed.”

By THOMAS MATIKO and AGENCIES

VIDEO/PHOTOS:When ‘Prophet’ Owuor Was Beardless and Hustling in The Streets

Murkomen and Susan Kihika Fight Back After Uhuru Ejects Them