No jokes: DP William Ruto wins gold in half marathon
Politicians on Sunday bowed out of the 10-kilometre race in the Dr Wahome Gakuru Memorial Half Marathon, leaving Deputy President William Ruto to run in the company of his guards and a few athletes 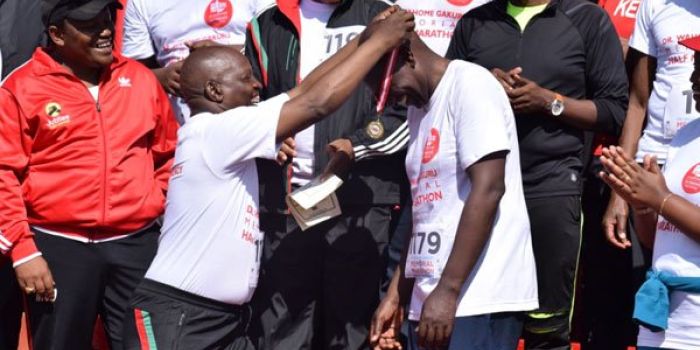 Those who started with the deputy president (DP) did not go past the 200-metre mark.

Mr Kahiga and a host of other MPs, however, joined Mr Ruto at the tail end of the race.

The DP crossed the finish line in one hour and six minutes after consistently jogging through the dusty and hilly terrain.

Of the leaders present, only Chinga Ward Representative Kiruga Thuku ran alongside the DP.

Hundreds of Nyeri residents turned up for the first even which comprised a 21-kilometre race for elite athletes, a 10-kilometre race and a five-kilometre corporate race.

Mr Ruto flagged off the 21km race minutes past seven at Ruring’u stadium. Participants ran from the stadium, cut through Nyeri town to Kamakwa, headed to Tetu boys and Gitero and then back to the starting point.

At his burial, Mr Kahiga, who was then his deputy, suggested the marathon to honour him.

The race was to take place after the completion of the stadium, but the revamp has stalled for the last eight months due to lack of funds.

The government is upgrading the facility to international standards at a cost of Sh450million.

Mr Ruto, however, promised that the work will be finished in a year.

“I commit [to this project] and assure the people of Nyeri that the stadium will be completed in the next year, alongside other stadia whose construction has been undertaken by the government,” he said.

The Christian’s Choice For 2022 Elections: William Ruto or Raila Odinga?

Which one is Better? Career in Health Care or IT In the Diaspora

Pain of a mother: I sold charcoal, milk to raise Jowie

Word of the Day:Be Thankful Always