There was drama at wedding at ACK Jehovah Shammah Prayer Center in Pipeline in Nakuru after a pregnant jilted lover stormed a wedding of her alleged husband.

Drama unfolded at the church at around mid-day when the bride Agnes Wangari, allegedly pregnant, was ushered in church in a ceremony which was presided over by Livingstone Kimani of Heroes of Faith Church in Ponda Mali area.In low key ceremony, the gate was kept closed most of the time and those getting in were invites only. The groom, Dennis Kinyanjui was the center of attention entangled in a love triangle.The mood was however tense- a jilted Agnes Wanjiru and her mother Lucy Wanjiku stood outside patiently waiting for occasion to kick off even as those manning the gate suspiciously allowed those invited.

At exactly 12:30, the bride was ushered in to the church compound and the gate locked. Wanjiru and her mother too, were locked out. Tension soon started building up as Wanjiru, her mother and their supporters started causing drama, attracting the rival group who had earlier entered in to the church compound. The media team too, who had entered the church were ushered outside.”This is an invites-only event. It is a celebration of love, because the love birds got married months ago and nobody opposed it,” one of the ushers told us.He said the event was private and nobody was allowed to disrupt.As the drama ensued at the gate separating the rival groups, insults were hurled all over as the rival groups threaten to tear each other apart.At around 1:30, the bride was ushered in to the church. The cake, meant to ice the occasion too, was tactfully covered at a secluded corner, awaiting the moment.

Minutes later, ululation filled the church, as the agitated group outside the gate struggled to get in. At 1:38, five months old pregnant Wanjiru scaled up the gate, successfully touching down the church compound. Ironically, none of the rival group dared laying a hand on the 21-year-old as the watch with awe. The media had been flushed outside the gate but minutes later, everyone was climbing up the gate, including Wanjiru’s mother and her supporters.Inside the church compound, everything was calm. The bride and the groom were already inside the church, awaiting the big announcing-the husband-wife union.The service was however interrupted with the rival group banging the door, with window panes breaking and clinging as the group demanded to be allowed in the church which was locked from inside.The agitation and exchange of words, too attracted some blows which finally cooled after a while. After all, the service was hushed.

Wanjiru however revealed that she was informed of the wedding the previous evening by a friend. She says she has been in a relationship with Kinyanjui for the past three years.”We have been in a relationship since I was in Form four and even had an agreements binding us. The hospital insurance card indicates I am his wife and we also had a signed agreement with our church pastor to bind Kinyanjui to support me and the unborn baby,” Wanjiru said.Wanjiru said she wanted to be recognized as the wife. She says though her lawyer, the church Bishop Stephen Kariuki had received a letter asking him to refrain from joining Kinyanjui and Wangare in holy union.“Unfortunately, they looked for another pastor to officiate the wedding without recognizing me,” Wanjiru said.Wanjiru’s mother however said efforts to stop the union bore no fruits even after the church which both Kinyanjui, Wangare and Wanjiru were worshipping in refused their union. 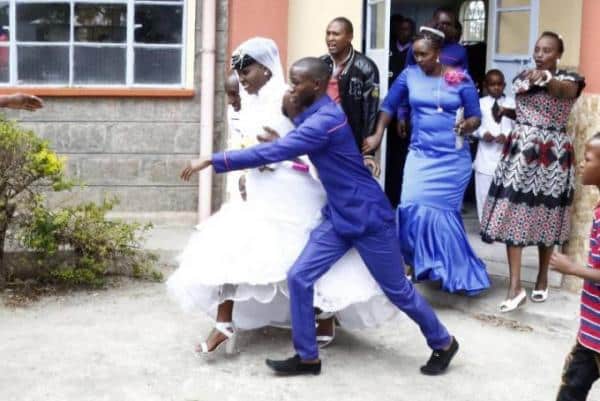 “The church refused the union but they moved in to another church and hired a pastor to officiate them besides our efforts to have Kinyanjui support Wanjiru until she gives birth.Rumours however has it that both the bride too, is expectant”, Wanjiru’s mother said.Efforts to get in to the church however bore no fruits as the rival group locked the doors, upon which the pastor hurriedly officiated their wedding.At around 2:35, Kinyanjui and Wangare were married. However the cakes and the food remained untouched as the bride and groom were whisked in to awaiting vehicles as they refused to address the media.The pastor too, was whisked in to an awaiting car, which sped off with the convoy leaving the place isolated and rival groups leaving in a hush.