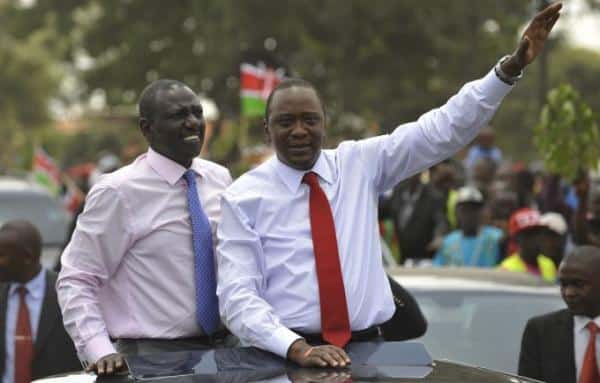 Uhuru Kenyatta is the president of Kenya and one of the best paid presidents in the world. His deputy, William Ruto is paid handsomely as well. The salaries, which are calculated by Salaries and Renumeration Commission, are fixed in such a way that no government official in Kenya earns more than the two leaders.

In 2014 the two leaders proposed 10 % salary pay cut after it emerged that government officials consume more than 62 % of the budget, but only a fraction of senior civil servants honoured it.

The President Uhuru Kenyatta and Deputy President William Ruto have not yet taken the 20 per cent pay cut that they promised Kenyans in March 2014.

The President and Mr Ruto had in March said they would lead in taking the salary cuts. The Head of State had further said Cabinet secretaries and parastatal chiefs would take a 10 per cent pay cut.

Meanwhile, President Kenyatta’s salary and that of his deputy William Ruto will increase by 10 per cent in the year starting July even as the government’s pushes to reduce the ballooning public wage bill.

Treasury documents released in February show that the combined annual pay of the President and Mr Ruto will increase to Ksh40.2 million in the 2017/18 year from the current Ksh36.6 million. But their allowances remain unchanged at Ksh14.6 million.

The two got a 9.1 per cent pay rise last year despite their announcement in 2014 that they had taken a 20 per cent pay cut to contain the bloated wage bill. The pay increase will only apply if the two are re-elected in the August polls.

Should they fail to be re-elected, the new office bearer will start on a lower pay set by the salaries commission. The combined starting basic salary of the president and his deputy is estimated at Ksh2.7 million.

The Treasury had last year frozen the President’s pay rise and that of his deputy for two years to 2018 as part of the austerity measures.

JUST DO IT: Giving up always looks like the easiest way out