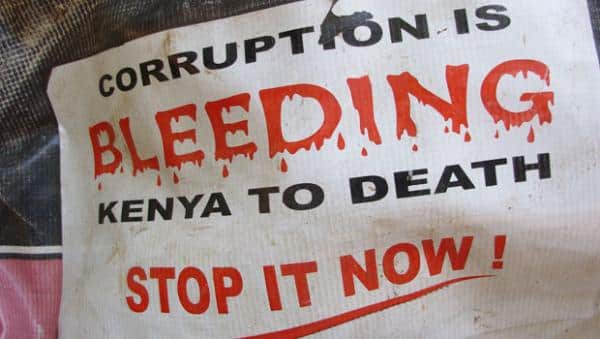 It is very sad that the very people that are supposed to be protecting us are the same perpetuating corruption and working together to harass and steal from the common man. We don’t excuse the breaking of the law especially drinking under the influence but the message below is just an example of how lawyers,Judges and police are working together in Kenya just for their benefit and at the same time feeding the monster called corruption. It is a cartel that the president will have to find a way to deal with otherwise we are doomed. Here is the story borrowed from social media:

AN old friend of mine is still recovering from shock after coming face to face with the ugly monster called corruption in Nairobi traffic. His experience will leave some of you speechless but others will be asking,”kwani hujui hivo ndio kunaendanga?”
IT was simple. During a staff end year party he had one too many till late hours then hit the road. At Kilimani area he was flagged down. Alco blow confirmed his crime and he was arrested. A police officer drove his car to Kilimani Police station.
THERE he and others were asked to give 20k bribe each failing which they would be taken to court and get fined 40k. They assumed the “briber solicitor” was only playing with their mind and decided court was the best way.
I can confirm to you that the fine for drunk driving is anything up to 100k. I have insisted here that a police officer who asks for a bribe is himself already a criminal offender but that is not what I’m writing today.
YESTERDAY morning, my friend was taken to court together with many others some of who had slept in police stations for just failing to belt up.
He tells me on getting to the court cells, the corrupt networking kicked off. First, the group was kept in court for hours waiting for the “judge”. You would think its coincidence that traffic cases don’t start off immediately. It’s a plot.
He could here excited officers telling the suspects that the fines that day would be ranging between 40k to 70k. Again it’s not just hot air, it’s part of the script.
AFTER sitting in court for hours, my friend was already tired and desperate and frustrated. He was required to be at work he is a university lecturer).
THEN one of the police officers approached him and asked him if he was ready to play the game. At that time my friend had called me and I had informed him what to expect.
The officer told him if he had 20k and he confirmed it. He was then taken to the chambers of the “judge” and introduced to the “judge” by the officer. Chamber is the private office of judge or magistrate.
A very casual and cordial discussion ensued between him and the judge, who informed him that he was helping him. At the end they agreed that instead of being fined 40k which the “judge” intended to go and fine all the others waiting in the court, my friend would pay 20k. The police officer was then given the 20k and told by the “judge” to go and bring a receipt for my good friend. When the receipt was brought back, it indicated he had been fined 10k. And the plea was “entered” in the court file.
MY good friend was set free. True enough, those who remained in the court were fined 35k, 40k and above…He could not believe this was the judiciary.
THE reason why the “judge” was not going to hear the cases was to ensure the suspects, especially the elite ones were pushed to desperation so that they can come to the negotiating table through the established network.
Going back to the police station for his car, he was told to pay 7k towing charges. Never mind that the car had actually been driven there by one of the arresting officers.
WHEN I spoke to him this morning, he was all lamenting…”Wahome this country is dead. We have nowhere to go, let’s just accept its dead. Even our leaders don’t know what is happening, they are clueless. No one knows how much you should pay for what offence. Its a rotten system,”
AFTER listening to his story, the first question I asked him was this, “how do you know that the chambers you were taken to is the chambers of a “judge”? How do you know that it was not an office of any other officer in that court taking advantage of your naivety?
THE truth is, if I can’t tell what was what or who was who. With such experiences, I can’t continue telling anyone never to give a bribe.
KENYANS listen, just bribe.  Your country is long gone with the dogs don’t be left behind.
I have preached here before but I don’t think anyone listens. In matters traffic we should have one FINE stated in the law, without leaving any room for the magistrates to vary. For driving drunk,the fine should be stated 20k or 50k or 100k, not setting the maximum and leaving magistrates to play round with the fines and to use them to solicit for bribes. If I think I’m guilty, I should just Mpesa my fine to the judiciary and off I go.
BUT with leaders like David Maraga heading the judiciary we are stuck to ground zero.
SO FOLKS bribe. If you can reach the Inspector General himself and he accepts your offer, please bribe him. If you can reach David Maraga himself the better. If you can make it to State House, bingo!!!
DON’T listen to me anymore. Don’t call me when in such trouble, I will not help you. Bribe your way out and go your way. God will understand.

VIDEO: Drama as Kirinyaga Woman Rep Ngirici is confronted by angry motorist for…