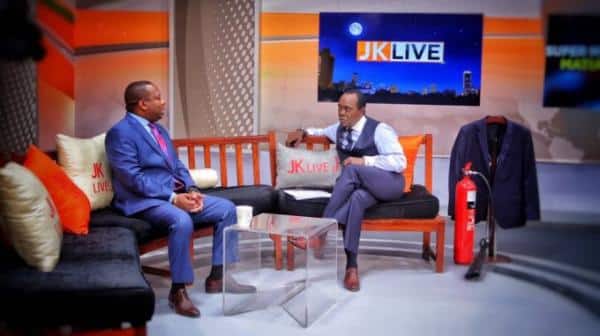 Governor Sonko appearance at JK live to abuse people who cannot defend themselves leaves a lot to be desired.

Public platforms are meant to enlighten Kenyans on matters that are beneficial to members of the public but they are often used to score even which is an abuse of the purpose intended for.

Sonko’s language especially  to Governor Waititu for example was a direct attack and by confessing and disclosing past occasions when the two used to smoke weed together will not be of benefit to Kenyans for the same shows malice and sad still when it’s altered by a person holding such a big office.

There is already a pending court regarding demolition of Marble Arc Hotel and matters in court should not be mentioned in public. Governor Sonko even continued using abusive language to the owner of Marble Arch by further calling him a thief which is defamation of the worst order that needs further proof or clarification.

Sonko madness was further extended by even producing strictly confidential letters and beaming them on the big screen for the public to see and one wonders what type of a TV station can allow such unprofessional behavior.

The fact that Jeff mentioned that words expressed by Sonko were his views and not Citizen views did not save the day for the damage had already been done.

The people abused on public TV should sue this rogue Governor so that he can go back to reality and perform his duties without intimidating members of the public as well as his fellow workers who he has targeted but the same cannot defend themselves.

Fame cannot be achieved by exposing people in public as the same can be done silently and if the Governor will achieve immobilizing the cartels through a court system then he will definitely get some honour.

Dragging and boasting his association with the President will only amuse a trollop at Koinange street as Kenyans are intelligent people.

Governor Sonko please go slow as many have suffered in that same office while trying to fight corruption for the people behind it are ruthless and one should trend with caution.

Yes we all agree you are doing the right thing but approach the same by going through the right channels.