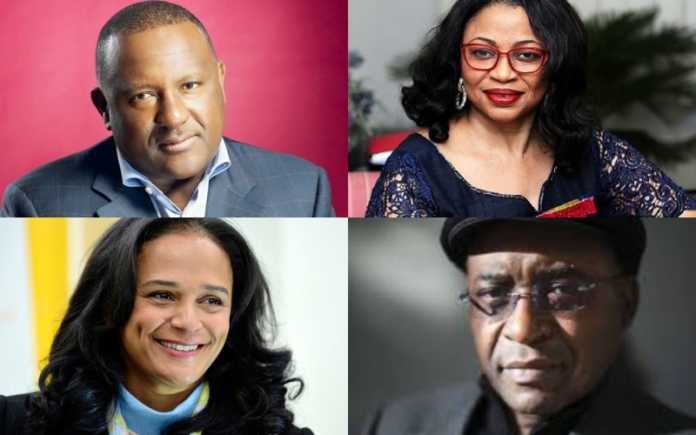 It’s Njaanuary and people are struggling to make ends meet after overspending over the festive season, although not everyone is facing difficult times.

Forbes has released a list of 19 African billionaires and only two women made it to the list: businesswomen Folorunsho Alakija from Nigerian and  Angolan Isabel dos Santos.

Unfortunately, no Kenyan was on the list! Below are the billionaires who run Africa:

He’s a Nigerian investor, and owner of the Dangote Group, which dominates the sugar market in Nigeria. He also owns Dangote cement. His net worth is $10.3 Billion

Adenuga owns Globacom, which is Nigeria’s third-largest mobile phone network, plus oil exploration firm Conoil Producing, extensive real estate holdings in Nigeria and a network of 12,000 cellphone towers. His worth is estimated at $9.2 billion.

He is a diamond heir Nicky Oppenheimer of South Africa. His grandfather founded diamond mining firm DeBeers, which Nicky ran and then sold to mining giant Anglo American for $5.1 billion cash in 2012. He is currently worth an estimated $7.3 billion.

He’s an Egyptian billionaire businessman, the youngest of Onsi Sawiris’ three sons. He was the CEO of  Orascom Construction and now the chairman of Aston Villa F.C. His net worth is $6.3 Billion.

A South African-born entrepreneur, who is the eldest son of business tycoon Anton Rupert. He is the chairman of the Swiss-based luxury-goods company Richemont as well as of the South Africa-based company Remgro. Net worth is $5.3 Billion

an Algerian billionaire businessman, CEO of the Cevital industrial group, the largest private company in Algeria, active in steel, food, agribusiness and electronics. His net worth is Issad Rebrab $3.7 B

He’s a South African chairman of leading emerging markets media group Naspers. The company operates in 130 countries and has the largest market capitalization of any media company outside the US and China. His net worth is $2.3 B

The Russian-Angolan businesswoman is Africa’s richest woman and the eldest child of Angola’s former President José Eduardo dos Santos. Her net worth is $2.3 B

He is an Egyptian businessman and former politician. He is the chairman of Mansour Group that is the second largest company in Egypt by revenue. Net worth $2.3 B

Strive Masiyiwa is a Zimbabwean businessman, entrepreneur, and philanthropist. He is the founder and executive chairman of diversified international Telecommunications, Media and Technology group Econet Wireless and Econet Media. His net worth is $2.3 Billion

A South African billionaire mining businessman. He is the founder and executive chairman of African Rainbow Minerals, which has interests in gold, ferrous metals, base metals, and platinum. His net worth is $2.3 B

Moroccan businessman and current Minister of Agriculture in Abdelilah Benkirane’s cabinet since 2007. The CEO of Akwa Group, a Moroccan conglomerate particularly active in the oil and gas sector. His net is worth 2.1 B

A Tanzanian businessman and former politician. He is owner of MeTL Group, a Tanzanian conglomerate founded by his father in the 1970s. His net worth is $1.9 B

A Moroccan Arab businessman who owns a bank an insurance firm owner. His net worth is $1.7 B

Is a Nigerian businessman. Abdul Samad is the founder and chairman of BUA Group, a Nigerian conglomerate with interests in manufacturing, infrastructure and agriculture.  He is also the chairman of Nigerian Bank of Industry.