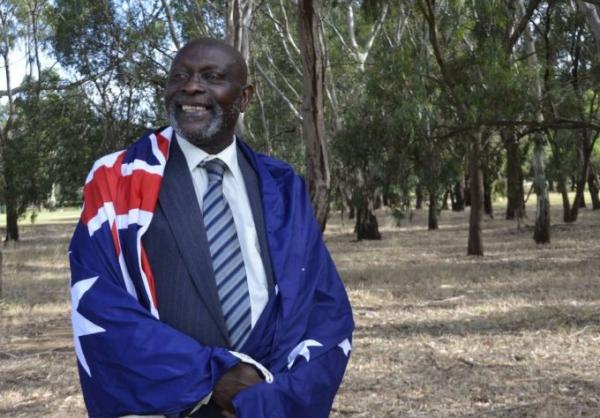 A retired agricultural scientist who helped many SA farmers improve the health of their soils is inspiring many of them again as an Australia Day Ambassador.

Kenyan-born David Malinda has been an ambassador for nearly a decade, bringing together communities across the state and sharing his life story.

Last year he was a guest of the District Council of Elliston and on Saturday he will be the guest speaker at an Australia Day ceremony at Snowtown.

“I particularly like talking to people from the country about what effect climate change is having on them and their views on how to address it,” he said.

David, who was named 2018 Port Adelaide Enfield Citizen of the Year, says Australia Day is a chance to celebrate Australia’s multiculturalism and the contribution those from different ethnic backgrounds have made.

Kenyan Letter to New US Ambassador over visa frustration…

“I have met people from all over the world who have come here to join our Indigenous Australians,” he said.

“Australia Day is a day to reflect on our national journey: acknowledge our past, reflect on our present and look together to our future without leaving anyone behind,” he said.

David first came to Adelaide in 1979 for post-graduate ag studies.

At the time it must have seemed a world away with few Africans living in SA.

After returning to Kenya for a year he moved back permanently in 1984.

He worked in the remote Milteburra Area School on the Far West Coast, teaching science, biology and agriculture followed by a stint at Kadina Memorial High School.

In 1986 he joined the SA Department of Agriculture, based at Northfield laboratories and later the Waite Campus.

Among his lasting legacy in more than two decades in ag research and extension was developing a progressive tillage system.

“Australian soils had been degraded quite a lot by compaction so we found ways to reverse it by modifying the soil profile to increase the biology and the root penetration into the subsoil,” David said.

“It took six years to develop and another three years to test but we had some great results.

“One WA farmer was getting three bags a hectare and the next year the rain was the same but he got 10 bags/ha.”

The farming system was also adopted in China, Turkey, Eritrea, Kenya and South Africa and although David retired in late 2007, he believes many of the principles are still being used in no-till cropping systems.

Australians have many reasons to celebrate on Australia Day, according to respected African-Australian David Malinda, from the freedoms we enjoy to the sense of a fair go for everyone.

“I have enjoyed learning about different cultures and picking the best of each culture to enrich my culture,” he said.

David became an Australian citizen in 1986 but moving here was not the first time David lived abroad.

After finishing school in Nairobi, he received a scholarship to study aeronautical engineering in the former Soviet Union, but when he got there he was convinced by Kenya’s ambassador to change to agricultural engineering.

“Kenya had its own airline in Air Kenya but the ambassador said Kenya was really an agricultural country so I swapped courses,” he said.

After graduating in 1969 he worked for the Kenyan Ministry for Agriculture, including testing agricultural machinery, until pursuing post graduate studies in Australia.

He says Australia has given him many opportunities but he has been fortunate to return to his “other home” in Kenya regularly.

“It was hard leaving behind my sisters, brothers, nieces and nephews but I have been very, very lucky working as a scientist to travel overseas 14 or 15 times in 21 years and I could take two weeks to go home each time and see my people,” he said.

Since retiring from SARDI he has been a relief teacher in primary schools across Adelaide.