As a widespread general strike in Zimbabwe entered its third day on Wednesday, a prominent Kenyan -Dr David Wachira- took to social media to update on the situation.

Dr Wachira is a public sector specialist who has been working with the World Bank for over five years. He is best remembered as the Mukorino from Nyahururu who Nairobi Wire introduced to our readers back in June 2017.

He confirmed that the Zimbabwean government had shut off access to the internet and social media, making it difficult to get messages out.

“I have received several concerned messages on the ongoing situation in Zimbabwe. Since the government has shut down the Internet, telecommunications and social media (including WhatsApp), it has been very difficult to get messages out. Nevertheless, I wanted to assure everyone concerned that I am well and so are my friends and colleagues,” wrote Wachira.

Dr. Waigwa Makes History As First Mukurino To preach At…

He added that the violence that started on Monday has subsided but they were still on lockdown as armed soldiers patrolled streets of major cities.

“Currently, the riots and violence that gripped the major cities on Monday, have subsided. Everything is however still on lockdown while some door to door searches by the authorities (mainly targeting young men). Security forces have responded to the protests with live ammunition, rubber bullets and teargas, which they’ve fired at protesters and into people’s homes. It has been surreal to hear shots being fired near the house.”

Dr David Wachira added that there are severe power outages occasioned by heavy rains and the violence.

“Most of us have not had electricity or running water for the past three days,” said Wachira, adding, “Nevertheless, I am amazed at the resiliency of Zimbabweans and their peaceful approach to such dire challenges. It is a strong and contagious message of hope!”

Zimbabweans took to the streets on Monday following the government’s announcement of record petrol and diesel price hikes. They are now paying 150% more for fuel.

Zimbabwean president Emmerson Mnangagwa made the announcement before leaving for Russia on a state visit, leaving citizens stranded and agitated.

On Wednesday, he released a statement from Moscow saying he’s deeply saddened by events in Zimbabwe.

He noted that while everyone has a right to express themselves freely, there can be no justification for violence.

According to Amnesty International, eight people have been killed since the protests started on Monday when police and the military opened fire on protestors. 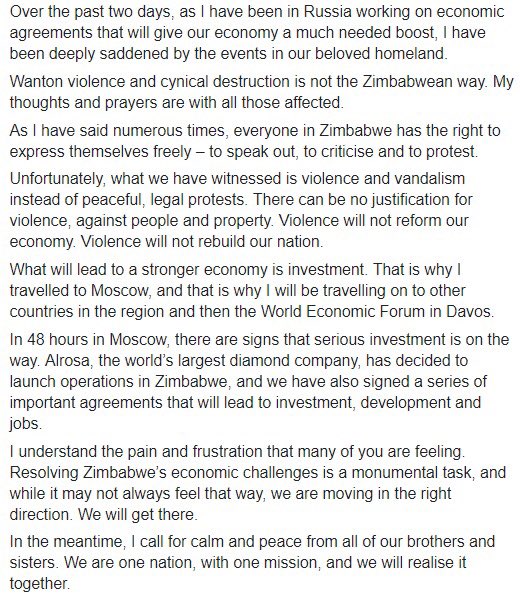 We are one nation, with one mission, and we will realise it together. My thoughts on the current situation: