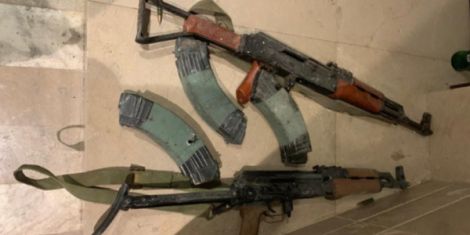 Police have identified the residence of one of the attackers of the Dusit D2 hotel in Riverside Nairobiused to live.

According to reports, the suspect had rented a house at an upscale estate of Guango in Ruaka whose rent ranges between Kshs 40,000 and Kshs 50,000.

“Kila mwezi unalipa (Every month we pay) Kshs 40,000 to Kshs 50,000,” stated one resident from the area when interviewed by Citizen TV.

Residents of Ruaka, however, revealed that they feared the suspect owing to his nature of on and off access to the house he had occupied for roughly two months.

“Tunaogopa, juu yeye alikuwa tu mtu wa kuingia na kutoka, sasa huwezi mjua zaidi ya hapo (We feared because he was the kind of person who was secretive and we never knew much about him),” he continued.

Nevertheless, they disclosed that the suspect was jovial and that he would always respond to greetings.

Witnesses further revealed that the house was empty at the time of the seize revealing a hole where they stored their equipment.

“He used to wear T-shirts and greet us,” stated a security guard in the area.

Further reports established that the assailant had a wife but no child was spotted.

Police sealed off the residential property labelled No. E9 where the attacker was spotted several times.

The residents alerted the police after they saw his car, of plate number KCN 340E, linked with the terrorist attack that lasted for more than 16 hours.

The area contains more than 200 houses and the media has been barred from accessing the properties since the police took over.

MY DAD WAS POISONED, SAYS MUTULA