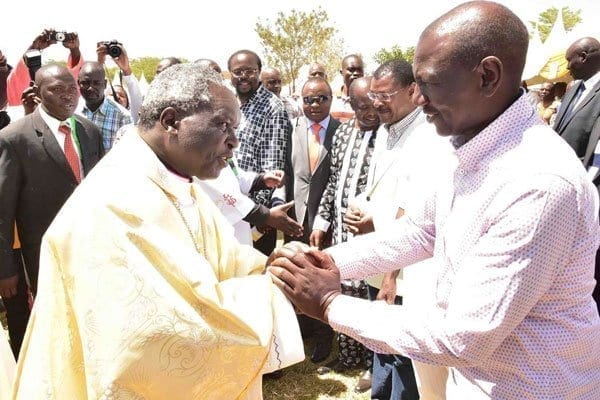 The Deputy President William Ruto gave Archbishop Philip Anyolo a new vehicle after his inauguration as the Archbishop of Kisumu.

The DP said the Mitsubishi Pajero will allow him move across the larger metropolitan archdiocese with ease.

“As a spiritual leader overseeing parts of northern Kenya from Turkana, Kisumu to Migori, we have decided to come together and give you a vehicle which will enable you visit people around your region,” Dr Ruto said.

The DP said the donation was made possible through ‘contributions’ from President Uhuru Kenyatta, leaders from the South Rift and a section western Kenya leaders.

“I would like to thank the President for accepting to contribute in this noble course and enabling us to raise the funds to purchase this vehicle,” he said before delivering the car to the clergy at Uzima Medical University grounds in Kisumu on Saturday.

He delivered the gift accompanied by Kiminini MP Chris Wamalwa who serves as the chairman of Catholic MPs in the National Assembly.

Drama as Babu Owino and Jaguar fight in parliament- VIDEO

Stress blamed for deaths of Kenyans living in America