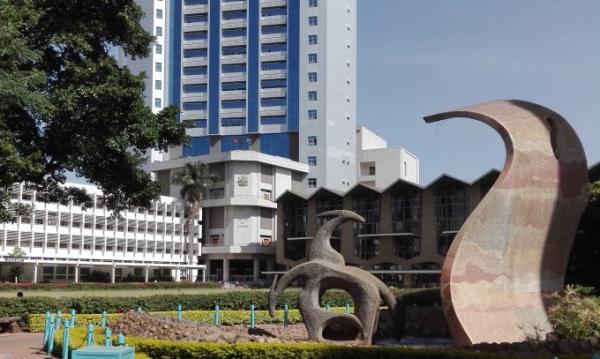 It is regarded as one of the best University in Africa where more than 180,000 students have graduated since inception in 1970 but when one seek accreditation using the given transcript, you will not qualify to register for any board examination anywhere in the world.

The University of Nairobi was ranked position 6 in Africa and 697 in the world ahead of all other universities in the region and thus confirming its place among the academic giants worldwide.

The ranking placed the University among the top universities worldwide out of 720 best ranked higher institutions of learning.

The rankings attest the stiff competitive position the University of Nairobi has steadily maintained in the world and in short it has established itself as a world class university committed to scholarly excellence.

However, those ranking , position and description of scholarly excellence is all but a mistaken belief, and sheer imagination  for after arriving in a foreign country especially in Britain and America , that degree certificate one carefully carry along with, is just a piece of useless paper without enough credits to be referred to as a full degree.

The transcript write up given for example can be challenged by a middle school transcript in the US and the accreditation body simply advice many to repeat certain subjects as they fall short of credits to qualify for a full similar degree in United States.

Take for example a degree in Architecture from University of Nairobi which if compared to the same degree in the US lacks 53 credits after evaluation by NAAB,.. the accrediting body that regulates University education standards in America. (facts from past experience by Kenyans currently in the US)

The highly respected Architects trained at University of Nairobi will not automatically qualify to sit for board examination  in America after evaluation and one have to study further to be certified.

Architecture degree in US require one to study humanities, …English and literature included and one needs a total of 9 credits  hours to be certified ,….something not included at University of Nairobi course structure.

Architecture at the University of Nairobi until recently did not require one to study English, and humanities as prerequisites but those subjects are mandatory in the US.

Theory of structures studied at University of Nairobi have a deficiency of 6 credits compared to US structure, …Building Technology has 6 credits deficiency and many others like ecology, history of Architecture and even law in professional practice  just to name a few.

The only subject that students qualify and even have more than required accumulated hours is design thesis but all the rest that student go through during the five year program  at University of Nairobi,  lacks the minimum requirements according to American standard.

After presenting transcript provided by University of Nairobi in America, you will be evaluated and the accrediting body after scrutinizing will further advise you to go back to accredited college to gain more credits in order to qualify to sit for the board examination.

The minimum years to rectify the said deficiencies for a degree like Architecture accumulated to 53 credits is two years if you study full time or even five years if you study with breaks and in short, its like repeating the degree. 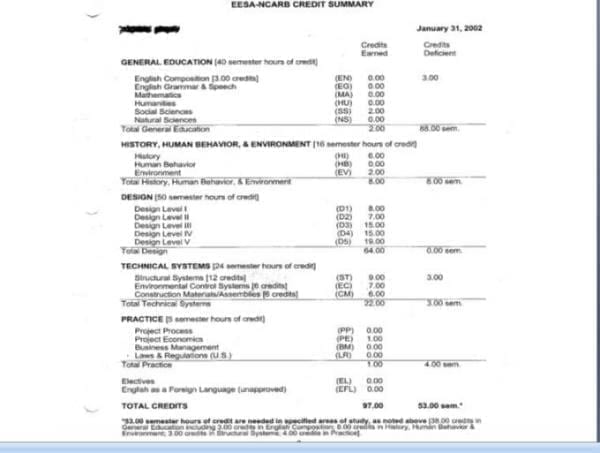 ABOVE IS A COPY OF EVALUATION FOR A DEGREE IN ARCHITECTURE

Many get discouraged or cannot even afford to pay for their education and survive at the same time and give up …thus resulting to doing meager jobs that are easily available.

Some convince themselves that they will do the meager jobs for a limited time but eventually, many find themselves doing the same odd jobs 10 years down the line.

When you compare the struggle Kenyans go through to get registered as professionals in various disciplines in United States, one fails to understand how foreigners including Americans are easily registered in Kenya by just taking and passing the simple board examination.

To prove how disorganized lecturers are, the University of Nairobi does not issue detailed transcript but only a sketchy summary of subjects passed because in the first place they have none. (shady badly typed transcript issued )

They do not have records of detailed weekly or monthly continuous assessment that students in America easily obtain and thus not able to produce when requested.

After requesting transcript from Kenya, all one gets is a summary showing the grade obtained and the grade given as a percentage, and thus making it impossible to relate and compare with credit hours system in America.

It is my wish if education was made universal in terms of teaching so that it does not matter which country one come from if all degree course structure were made identical or equivalent to be acceptable anywhere.

The same also applies to trained doctors from University of Nairobi after relocating as the story is the same and they too are required to repeat certain papers in order to be allowed to sit for the board examination.

Engineers and teachers are also in the same category as one will not automatically sit for PE, or get a teaching career in America without repeating the degree or obtaining more required credits hours to qualify.

The University of Nairobi should act without delay to maintain its status and further take time to compare their education curriculum with those of other great Universities so that it can obtain equivalent status.

The above disparities in education equivalence between Kenya and America hint out why immigrants graduates from Kenyan Universities or even other African countries cannot easily transfer their education and be able to get jobs related to the degrees one acquired.

It is sad to imagine that even after studying at Princeton University the so called Ivy league, the person entrusted to structure the then University of Nairobi, Professor Josphat Karanja or his counterpart Professor Mungai, never took any initiative to elevate the University to acquire  accreditation status with American Universities.

It is with those few remarks to further urge the University of Nairobi to streamline the curriculum and raise the institution to universal standards to enable those immigrating to easily transfer their credits and be able to practice in all disciplines anywhere in the world.

If the situation remains the same, the so referred to as academic giants will be dwarfed the moment they relocate and it can be traumatizing to receive a disturbing letter from the accrediting board that reads “we are sorry to inform you that the degree presented fall short of minimum credit hours required”

Many have voiced their concern and we are optimistic that soon the main Universities in Kenya will uplift academic standards and eventually liaise with accrediting bodies especially in America  so that degrees offered can be evaluated in advance.