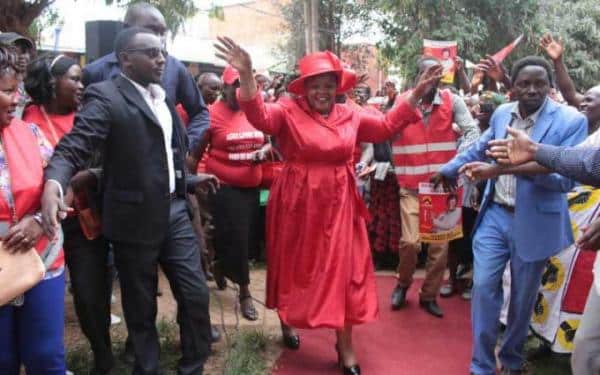 The efforts of the divorced wife of former Machakos senator Johnston Muthama to stop him from evicting her from his home have flopped.

The High Court ruled that Agnes Kavindu Musyoka, who divorced the politician in 1983, was living on his property in Mua, Machakos County, at his will but not as a wife.“The picture that emerged was not that of a spouse but of a person accommodated initially as a mother of the respondent’s (Muthama) daughter,” ruled Justice William Musyoka, who heard the testimonies of the two parties and their witnesses.According to documents filed in court, Muthama married Kavindu under Kamba customary law in 1975 and the couple had three children. The marriage was dissolved by the court in 1983.

Muthama then had a brief affair with her in 1996 which produced another child, a relationship she termed as a remarriage.However, in his response, the politician dismissed the remarriage narrative and asserted that the birth of their daughter did not have the effect of reviving the dissolved marriage. Kavindu moved to court in 2014 to stop Muthama from evicting her from the ‘matrimonial home’ on the grounds that she had a right to occupy it.She claimed she had been treated inhumanely and deprived of basic facilities such as water despite the home having two boreholes.“Since the water was disconnected from the house, I have resorted to using water from swimming pool for washing and bathing,” she claimed. Kavindu told the court that her tribulations started after Muthama asked her to quit her job to take care of the family farm in Mua.Turned violentShe claimed Muthama turned violent and stopped supporting her financially.Kavindu’s dowry was said to have been returned when their marriage hit the rocks and in 2014, Muthama decided to settle his three families on the Mua property and asked Kavindu to vacate.Muthama had in several political rallies dismissed claims that she campaigned for him. He said she attended some of the meetings “but only as a pastor, not as a wife”.He also told the court that she attended his father’s funeral as a guest and posed for photographs, adding that she continued to use his name despite the divorce.In its ruling, the court stated that a party who intends to rely on a custom is obliged to give evidence to establish that such a custom existed.

This can be done by adducing oral evidence by persons who are familiar with the custom.“None of the parties made any effort to establish whether there was any custom that governed cases of remarriage by parties whose previous customary law marriage between themselves had been dissolved and dowry returned,” Musyoka said in the ruling delivered on February 15.The court dismissed photographs tabled by Kavindu as evidence because she did not accompany them with a certificate signed by whoever took them.“Photographs are good at painting a portrait that words are not able to conjure. They breathe life into oral narratives and testimonies. They speak louder than words,” the court said.On the issue of the woman being mentioned in the funeral programme as a daughter-in-law, the court said this did not mean marriage.Seven daysKavindu through her lawyer Judy Thongori, orally applied to the court to suspend the ruling that also ordered her client to pay Muthama the cost he incurred in the case pending hearing and determination of the intended appeal.However, Justice Asenath Ongeri allowed her to appeal against the ruling, adding that she should file a formal application within seven days to have the decision suspended.She added that once filed, the document should be served on Muthama, who will be at liberty to file his response within another seven days and the matter be heard on April 4 this year.

Can Africans live without used cloths from White People? The Answer is No