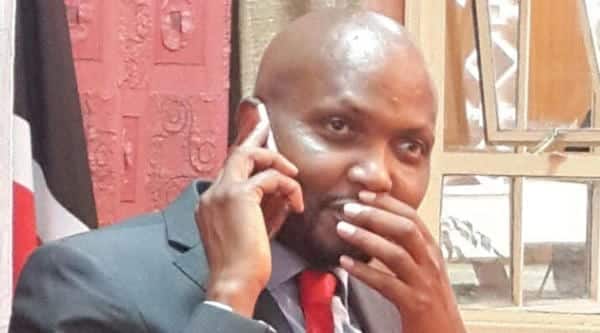 Gatundu South MP maintained that he was still on 2022 ballot and in the meantime, he will not behave like others who have been making trips to former President Moi, Kabarak home but if need be, he would prefer to make a trip to the Vatican

He demonstrated a lot of political maturity and tolerance during J.F.K. Live show and put to shame many of his colleagues who have been using the same platform to attack one another.

Kuria was very tactful when asked if he would support Kabogo as Governor if he decided to run when election are due, but never wanted to dwell on that issue and only quipped that it’s the people of Kiambu who can only decide.

He had a lot of praises for Atwoli and also maintained that he has no quarrel with Ruto thus making many to believe that he could likely be Ruto’s running mate and is trying to gauge and popularize himself among the Kikuyu’s so that he can be able to garner votes for him.

Jeff had some advice for him to maybe try a low seat like Governor of Kiambu, but the man could not easily buy that arguing that Uhuru never ran for Governor nor Raila or even Kalonzo as those are low positions for a man of his caliber.

Kuria strongly supported the handshake for he can now travel anywhere in Western Kenya which means that peace was achieved when the two rival leaders finally met and agreed to work together for the sake of unity and development of Kenya.

Whether his bid for top seat is real just remain to be seen but as it appears now, it is too early to determine if he has the clout required to make a momentous impact.

What does it take to be a President?

Is he taking a joke too far?

That being said and assuming that many Kenyans possess all the above, it is important to consider some of the basic qualities that make a good leader and we can here analyze some of the ingredients.

When choosing the president, we should not only look at their political affiliations and believes, but their character and more so family values.

The qualities a person possesses right from early years in school and even at home can potentially determine what kind of leader they will eventually become.

A good leader possesses the qualities of fidelity, uprightness and determination and without any of those mentioned, it is doubtful if a person can lead and direct a group, or in this case, a whole nation.

Another important aspect of a good leader is steadfastness.

Leaders have a lot of responsibilities, as everyone look upon them for guidance and hence they must be prepared to deal with each and every aspect that requires action and attention.

At times, leaders make hard decisions out of protocol in order to contain a situation, and after they do, they still must be ready to bear responsibility for those decisions.

When people can sorely depend on you to get them through not only during the good times, but hard ones too, then you have the qualities needed to make a great leader.

Another important quality of being a great leader is truthfulness. The possession of firm steadfastness ensures that a leader can make the most responsible decisions of what they truly believe is best for the country. Leaders that deny and not own senseless statement altered earlier just prove their weakness and cannot be trusted.

Having integrity means a person is sincere, responsible steadfast dedicated and principled. To be a good leader you must possess these certain qualities so that you are able to lead fairly and without predisposition to any segment of society.

Without uprightness and good family values, it will be hard to lead a nation.

The last, but not least, essential quality of a good leader is determination. With determination and focus a president that possesses such qualities will lead the nation to great heights of prosperity and still be able to steer the country in times of calamities

Therefore in 2022, when you proceed to cast your vote for the new President of Kenya, remember what makes a good statesman.

Soundness will ensure that our new leader can be trusted to carry out his job.

Truthfulness certifies that our new leader has good values to lead us fairly.

Excellence will ensure that he is fit to do the job

Perseverance confirms that out new leader will get us through the hard times.

If the person you will choose has all of these basic AND even more qualities not mentioned, then you can be confident that you will be making the right decision.

So help us God.