A photo of a man resembling President Uhuru Kenyatta appearing to drive himself has created a buzz.

In the photo doing rounds on social circles,  the man is seen waiting in traffic in a black car in what appears as snarl-up.  The photo had been shared by Dennis Itumbi, the Secretary of Innovation and Digital in the Office of the President. However, when reached for comment, he did not reply to confirm whether indeed Uhuru was driving himself.

When the President is caught https://t.co/pFubGYjMS7 traffic as he enjoys a drive in the city…@UKenyatta pic.twitter.com/Tv727HLCbi

Also captured on the photo is an elderly woman who is seen talking to the President through the driver’s window.

If indeed the photo is authentic, this would not be the first time the President would be seen driving himself as he has been spotted on several occasions driving alone.Early this year, President Uhuru and Opposition leader Raila Odinga showed Kenyans the depth of their friendship when they breached protocol and delayed the President’s flight by over four hours as they toured Kisumu.In a surprise decision that caught his security and protocol officers by surprise, President Uhuru changed his mind about boarding his jet at the Kisumu International Airport at the eleventh hour on and instead accompanied Raila in a tour of Kisumu town. 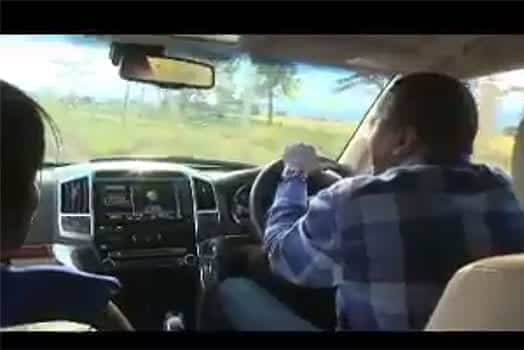