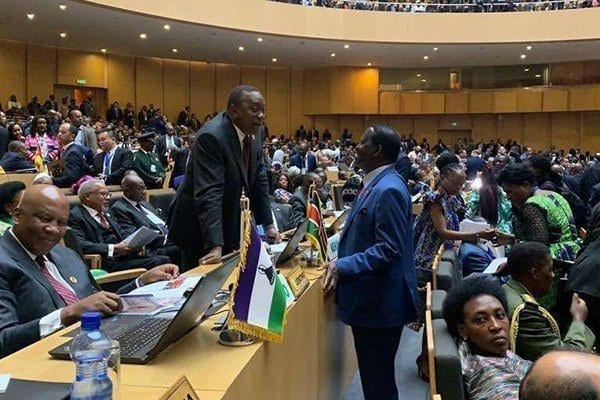 When he was appointed African Union’s envoy in October last year, a host of Kenyans were sceptical about the significance of Raila Odinga’s new assignment, with others even dismissing the development as a ploy to politically neutralise the Opposition leader.

But the recently concluded 32nd Ordinary Session of the Assembly of African Union Heads of State and Government in Addis Ababa may well have changed this perception.

During the two-day event, Mr Odinga joined African leaders in deliberations in the Ethiopian capital.

Complete with a golden circular badge on his coat lapel, reserved only for participating heads of state and high-profile guests including United Nations Secretary-General Antonio Guterres, the Orange Democratic Movement (ODM) leader savoured his moment as VVIP at the Addis Ababa event.

From the “high table”, he mingled freely and shared hearty moments with continental leaders, a factor that quickly prompted teasers on social media that Kenya was represented at the Addis Ababa event by “two presidents” — Mr Odinga and President Uhuru Kenyatta.

“The apparent VVIP treatment of Mr Odinga, almost to the level of a head of state, reflects his status as a pan-Africanist.

“Over the years, Mr Odinga has consolidated his clout as a nationalist, a prominent opposition leader emulated across Africa,” Prof Peter Kagwanja, the chief executive of the Africa Policy Institute, explains.

“But particularly the symbolic handshake with President Kenyatta, Mr Odinga has emerged as a statesman whose maturity and stature helped Kenya avoid polarisation.”

Mr Odinga’s interest in conflict resolution on the continent dates back as early as the 1990s, when he was a backbencher in the August House as the Lang’ata MP.

He was seconded to Mozambique and later Burundi by US pro-governance institutions to monitor the conflict and political situation in the two nations.

Later in 2011 as Prime Minister, the African Union dispatched him as a special envoy to the troubled Côte d’Ivoire to mediate the presidential poll impasse between strongman Laurent Gbagbo and Alassane Ouattara.

Noting that Mr Odinga has similarly led several electoral observer missions for AU and other global entities across Africa, his spokesman Dennis Onyango partly attributes his boss’s growing influence to the general respect Kenya enjoys among peers on the continent.

“I do not think it is just about Raila. There is a Kenyan factor to this growing respect and influence, and in fact some call it Uhuru-Raila factor in Africa, which has gotten stronger with time, thanks to the handshake.

“The country and its leadership are looked at differently at global events — with awe and a lot of respect,” Mr Onyango tells the Sunday Nation.

According to Mr Odinga’s aide, continental leaders have lately tended to adopt the uniform position taken by Mr Kenyatta and Mr Odinga.

And the spokesman cites the instance of the recent Democratic Republic of Congo (DRC) polls, where world leaders, including African presidents, initially rejected the election of Mr Felix Tshisekedi as President of DRC, instead siding with opposition leader Martin Fayulu, and demanding a repeat poll.

Somehow, it took the firm stand of the Kenyatta-Odinga pair to save the continent from a wait-and-see scenario and fully support Mr Tshisekedi.

But this was after most of the African leaders kept away from the swearing-in ceremony on January 24, which was attended by President Kenyatta and Mr Odinga.

“Similarly in South Sudan, the uniform and firm stand by Mr Kenyatta and Mr Odinga to resolve the long-standing political dispute between President (Salva) Kiir and Dr (Riek) Machar quickly found favour among other African leaders,” says Mr Onyango of the Kenyatta-Odinga pair, who proposed that Mr Kiir and Mr Machar serve as President and Vice-President, as before.

In a way, therefore, the ODM leader’s shining star on the global scene has greatly been boosted by President Kenyatta, or rather the newfound cooperation between the two.

“Added to these global leadership credentials is his new eminent role as AU envoy of infrastructure, which is a major priority in African Agenda 2063 on continental rebirth and development,” observes Prof Kagwanja.

He is expected to mobilise political support from member states and regional economic communities.

The difference though, according to Prof Kagwanja, is that Mr Odinga has a huge latitude of upward mobility in terms of political influence.

“While his peers are retired, Mr Odinga is still active and influential in his home country and on the African scene. He is definitely charting new waters in African diplomacy.”