President Uhuru Kenyatta is expected to travel to China next month hoping to secure Sh380 billion funding for the Naivasha-Kisumu standard gauge railway.

Our sources indicate that Uhuru will be in Beijing within the first two weeks of April.

on Friday, the Business Daily reported that Transport PS Esther Koimett and acting Kenya Railways MD Philip Maingi have spent the past week holding talks with Chinese government officials about the loan.

This will be the first time Uhuru will be going to Beijing this year after a disappointing visit in September last year when Chinese Premier Xi Jinping refused to approve the loan.

The Chinese leader instead asked Uhuru to conduct a commercial viability study on the entire Mombasa-Kisumu railway project and secure a financing deal with Uganda.

This came to Kenya as a surprise considering the financer, China Communications Construction Company (CCCC), had agreed to the plan a month before.

The planned China visit comes hot on heels of a two-day state visit by Ugandan President Yoweri Museveni to Mombasa to discuss bilateral ties with Kenya.

Analysts are of view that Museveni’s trip to Kenya was arranged by Uhuru keen to persuade him to back the project to enable Kenya to secure the much-needed funds to push the railway line to Kisumu from Naivasha.

Kenya is expected to complete the second phase of the project running from Nairobi to Naivasha by mid this year. It will cost  $1.7 billion (Sh170 billion).

“When we engaged the Chinese government, it was agreed that they support it. But we need to complete the feasibility study, not just for Naivasha to Kisumu but also all the way from Mombasa to Kisumu so that we can establish its commercial viability.

The first phase of the project from Mombasa to Nairobi was commissioned last year at $3.8 billion (Sh380 billion).

The Naivasha to Kisumu line is estimated to cost Kenya at least $3.6billion (Sh360 billion) before the country embarks on another 107km line connecting Kisumu to Malaba border with Uganda at an estimated $1.7 billion (Sh170 billion).

On Wednesday, the two heads of state held a joint press conference where Museveni renewed his decade-long commitment to co-finance the project with Kenya.

The two countries have been at loggerheads over the financing of the cross-border rail project, with China Exim Bank insisting that Kampala has to get Kenya’s commitment to building the section from Kisumu to Malaba before Uganda can secure funding for the line running from Kampala to the common border.

China had also declined to approve Uganda’s loan request for its first phase of SGR from Malaba to Kampala. Museveni who had also attended the 2018 China-Africa summit hoped to secure $2.3 billion (Sh230 billion) for the phase.

Kampala accused Nairobi of sabotaging its effort to secure funding for the project. It argued that the latter had failed to commit to financing the remaining two SGR phases, that is, Naivasha to Kisumu and Kisumu to Malaba sections of the line.

On Thursday, Museveni became the first foreign head of state to ride the Madaraka Express from Mombasa to Nairobi, carrying with him lots of goodies in kind for his cooperation.

Kenya pledged to allocate land in Naivasha for Uganda to develop a dry port for its cargo ahead of the completion of the SGR phase two from Nairobi to Naivasha in June.

Speaking during a state banquet in Mombasa, Uhuru said the link of the dry port with SGR from Mombasa Port will create an efficient movement of goods between the two countries. 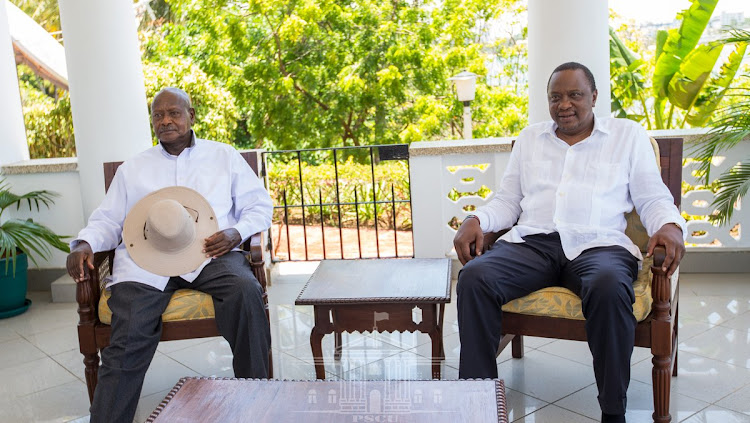 “I have confirmed to President Museveni that with that development in Naivasha and then moving the SGR to Malaba, goods will be able to move from Mombasa to Malaba in just two days,’’ Uhuru said.

Details and terms of the dry port offer were not immediately clear but Uhuru’s move is widely seen as a reward to Uganda for smoothing Kenya’s way towards securing the  Sh380 billion loan facility from Beijing.

It is also viewed as Kenya’s strategy towards retaining Ugandan cargo business amid rivalry from Tanzania which has been wooing Kampala to use Dar es Salaam port.

In 2017, the Tanzania Ports Authority started the revival of the central corridor, saying it  could leverage on efficiency and cargo cost from Dar es Salaam to Kampala to four days, thereby reducing the prices at which goods are sold to the final consumers.

Kenya also agreed to increase sugar imports from Uganda from 36,000 tonnes to 90,000 tonnes per year.

“I am glad that our counterparts have agreed to let Uganda increase its sugar exports to Kenya from 36,000 metric tonnes to 90,000 metric tonnes annually. Also, it is important that Uganda will resume exporting poultry to Kenya within a week from now,” Museveni tweeted on Wednesday.

Uganda will also sell its milk to Kenya. In return, Museveni lifted the 1997 ban on beef imports from Kenya which was occasioned by mad cow disease.

The bagful of goods to Museveni has irked local farmers who claim Uhuru used them as collateral damage to appease Uganda.

Yesterday, they took to Twitter to question the government’s commitment to its Big Four Agenda, especially food security.

Museveni welcomed the SGR as a game changer that was addressing the perennial problem of cargo delays in Mombasa.

He said President Kenyatta’s administration has made great strides to reduce delays of Ugandan cargo at the port.

The SGR has significantly reduced the time taken to move goods and passengers from Mombasa to Nairobi.

He said efficient handling of cargo at the port is good for the economy of Kenya and the hinterland countries.

The hashtag #FarmersUnderSiege trended top for the better part of the day with many users castigating Uhuru for betraying farmers.

“When you have a president who doesn’t care about his people… Uhuru Kenyatta literally sells livelihoods of small-holder farmers in the name of diplomacy and just so to advance his businesses? Does this guy ever stop to think about his people,’’ Emmanuel Atamba tweeted.

“Why should an egg from Uganda retail at Sh8 and that produce locally at Sh10? The market is big enough but Kenyans are edged out due to poor pricing,’’ Mureu said.

Kenya continues to secure loans to finance the SGR project amid growing concerns over public debt which has more than tripled to hit Sh5.1 trillion since 2013.

The loan, largely taken to finance infrastructural projects led by SGR, has seen the country struggle to repay, forcing the Treasury to borrow elsewhere to repay maturing facilities.

Critics like economist David Ndii have consistently questioned the feasibility of SGR, arguing that revenue from the project won’t repay the loans taken.

In December, Kenyans were dismayed to learn that the Port of Mombasa was used as collateral by the government of Kenya for a loan it secured from the Exim Bank of China to fund construction of the SGR.

The government, however, dismissed the allegation, promising to make details about the contract with China public.