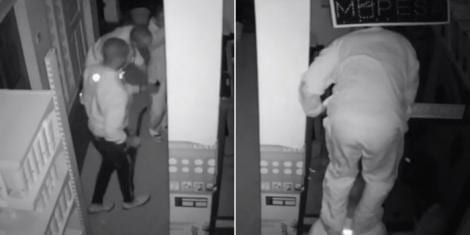 A CCTV camera footage has emerged showing three unmasked thugs breaking into a supermarket in Busia where they stole money and goods totaling to Ksh2.3 million.

In the video dated March 3 this year, the thugs are seen trying to break the door and when they are unable to, they decide to jump over in order to access what could be seen as the room that contains the cash box.

Speaking to Kenyans.co.ke, Francis Maingi, the owner of Frankmart supermarket, revealed that the criminals stole a total of Ksh1.1 million in Cash and goods worth Ksh1.2 million.

“They stole many things. They broke the safe and managed to take all the cash that we had. It was Ksh1.1 million. They stole cash and goods of approximately Ksh2.3 million,” he stated.

He further disclosed that he reported the matter to the police and even gave them the CCTV camera clips but arrests were yet to be made.

However, he continued, the police were able to track down and recover goods that were hidden at a store valued at Ksh50,000.

“So far, nothing has been done. There are no arrests. Only a few goods were recovered after wananchi (citizens) saw some goods hidden far away from the supermarket. We were called by police to identify if some of the goods were ours,” he continued.

The area’s Divisional Criminal Investigation Officer (DCIO) Samuel Agutu stated that they had carried out investigations and handed findings to Busia County Commander. My efforts to reach the commander were, however, futile.

Sadly enough, that was not the last time the troubled businessman would encounter burglars.

On Monday April 1, a godown belonging to Maingi was broken into by thugs who made away with goods of undisclosed value.

“They managed to break in and went through three floors which were full of goods,” he remarked.

Maingi is a certified Bidco agent and some of the goods that were stolen in the warehouse belonged to the company while some were awaiting to be transported for sell at Frankmart Supermarket.