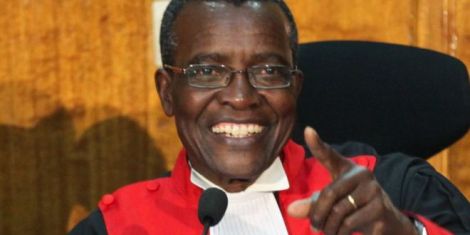 Kenya’s Chief Justice (CJ), David Maraga, added a feather to his cap as he was awarded an honorary Doctor of Laws degree at Andrews University in Michigan, USA.

The Supreme Court president shared his joy at being granted such an honour from the 145-year-old American University.

“I was deeply honoured to be awarded an honorary Doctor of Laws degree from Andrews University in Michigan, the USA last Sunday,” Maraga tweeted.

Kenya’s CJ was also accorded the prestigious opportunity to give the commencement address during the university’s graduation ceremony on May 5, 2019.

The historic ruling was the first of its kind in Africa as well as a stunning moment that placed Kenya’s democratic environment on the world map.

Maraga’s famous invalid, null and void declaration caught many by surprise including the opposition leader, Raila Odinga, who had filed the petition as such a ruling was unheard of in a continent where the judiciary arm of the government is often under the executive’s thumb.

Prior to his ruling, only Ukraine, Maldives and Austria had been through that road before across the world.

Justice Maraga more recently moved to assure Kenyans that the 4,000 appellate court cases would all be cleared by the end of the year.

He added that he had tasked the Court of Appeal President, William Ouko, to hasten the process of delivery in order to make his seemingly unachievable pledge a reality.

Since he took over as Kenya’s CJ, the devoted Christian has managed to reduce the backlog of cases that were more than five years old by 87 per cent.