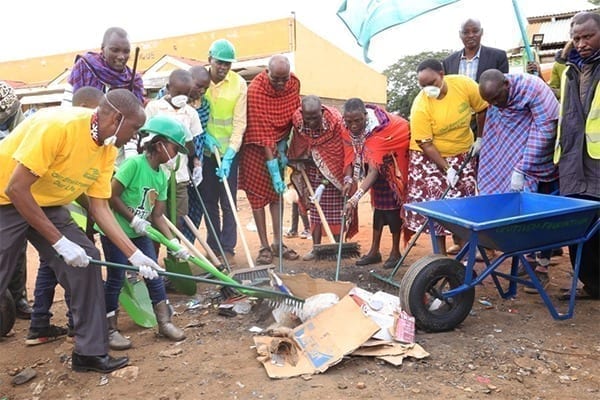 Fighting Air Pollution In Kenya: The world environment day was held on 5th of June 2019. The day which is observed in most parts of the world seeks to reflect on interventions taken on matters environment. In 2019, the focus was on beating air pollution. In Kenya today, the levels of pollution continue to rise amidst increased industrialization, infrastructure development as well as growing activities in the construction sector.

The National Environmental Management Agency NEMA has time and again been in the mainstream media advocating for an observation of the requirements to ensure safe and clean environmental interventions.

Their stand is based on the challenges at the grassroot level where communities in areas with heavy industrial action including Baba Dogo, Syokimau, Athi River, Dandora and even Industrial Area have continued to complain about air pollution. In the case of Syokimau, there has been a great increase in habitation with many urban populations moving in the area that is within the precints of the capital city.

However, the area of residence is not all that rosy! Fumes of burning metal which increases in the evening while in some areas the fumes from industrial and motor smoke are increased in the morning.

Globally, air pollution is a crisis that affects not only the environment but the people’s health in addition to affecting global warming. A research in China for example found that children who grew up in polluted areas risk having reduced intelligence or developing symptoms of asthma.

Already there has been evidence of pregnant women in polluted areas loosing their babies to miscarriages or having the babies prematurely as a result of long term exposure to air pollution.In other cases, the presence of low weight birth has been reported. But how can we beat air pollution?

Three Days to Go before AR price Tilt – Grab Your…

Optiven Foundation Spreads hope to the vulnerable Amidst…

A suggestion received from the World Health Organization indicates that this will be achieved through managing industries, transportation, waste and burning of fossil fuels. This requires both individual and corporate effort in line with the WHO as well as MDG7 that has to do with natural resources base and ecosystems sustainability.

The latter will mitigate to meet people’s food requirements and other environmental, social and economic needs. Climate change, increased water scarcity and conflicts over access to resources all pose challenges to environmental sustainability and food security.

Bearing in mind the environmental pillar of the Optiven Foundation, this is what drove the team to reach out to the community in Ngatataek, Kajiado County on 5th June 2019. The team of over 20 staff joined the community to clean up the market area and rid it of the marauding dirt that was making it an eye sore.

The exercise provided an opportunity for partnership with the local community including scouts and girl guides from the Ngatataek Boarding School, the local administration, and the business community of Ngatataek area. At the end of the event, tonnes of garbage mainly plastic and other waste was transported to a garbage dump and burnt symbolically to encourage the community to be self aware of the need to protect the environment.

Speaking when he rolled out the cleaning exercise, Mr. George Wachiuri, the Chairman of the Optiven Foundation called on the community and specifically the business owners of Ngatataek to be involved individually to ensure that the area is rid of garbage and plastic in particular. Wachiuri singled out the status of Machakos County and urged the local administration to borrow a leaf and make Ngatataek a model green city in the near future. His sentiments were echoed by local leaders led by Mr. Daniel Kupai, the Senior Chief of Ngatataek who reminded the community that a clean environment will serve their families well and keep the environment clean.

Kupai was speaking shortly after welcoming the team from Optiven Foundation and the residents of Ngatataek to the clean up exercise, during which time he reminded them that air pollution is a result of improper waste management. He thanked the Optiven Foundation for accepting to donate garbage bins in the next three months that will help alleviate the behavior of open dumping. Speaking at the same event, ODM Nominated Member of the County Assembly Grace Munei encouraged the community to teach the children cleanliness for a greener cleaner city in the future.

The team was speaking at Ngatataek market shortly after hosting Mrs. Mary Wachuka – a trustee of the Optiven Foundation who donated sanitary pads to over 200 girls at Ngatataek Primary School. She advised that by supporting girls, it ensures that no girl stays at home because of having their periods – a key incentive to ensure education for all. Mrs. Wachuka further encouraged the pupils to focus on education in order to be competent in the corporate world and be transformers in their own society.

She was accompanied by over 30 employees of Optiven Group who also participated in a tree planting exercise at the school grounds. Mr. Wachiuri also took time to empower the boys at the schools during which time he reiterated that the youth at the grassroot level are lacking mentors to help them be better citizens. He donated footballs to the boys to enable them use their energies and time appropriately while urging other corporate organizations to follow suit.

Caroline Mutoko’s Letter to Uhuru:Kibera Residents are Just Like The Ungrateful…