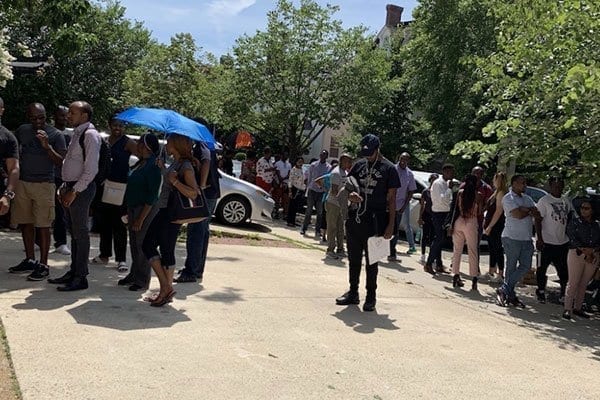 Kenyans in Diaspora last minute rush:  Kenyans living in the United States have been thronging Kenyan embassy in Washington, DC in the last few days in a rush to register for Huduma Namba ahead of Thursday deadline.

Since Monday, the embassy staff have been dealing with an unusually large, at times unruly number of Kenyans, some of who have travelled many kilometres from other states to list on the National Integrated Identity Management System, also known as Huduma Namba, even as most had dismissed it as unnecessary inconvenience.

To register, one is required to first complete an online form, download it, and then appear in person for biometrics capture at their closest Kenyan embassy or consulate.

The process has been ongoing at the embassy in Washington, DC and it’s satellite consulates in Los Angeles, California and New York.

A number of Kenyans living in the US have severally complained of the inconveniences of traveling long distances to Washington, DC for the registration process, long lines and hours of waiting at the embassy and general disorganisation by embassy staff.

The situation is compounded by the fact that, most of those who are turning up for the Huduma Namba are also processing their digital passports.

The deadline for the e-passports is September 1, 2019.

The application process for an e-passport also requires the applicant to visit the embassy in person for biometrics capture.

“It’s true most people who are coming to get Huduma Namba also want to process their new passports while they are here and we understand why because most of them have travelled from as far as Chicago. In fact, most of them seem to be more interested in the passport than the Huduma Namba,” an official at the embassy, who sought anonymity as they are not authorised to speak to the press, said.

Since last week, long lines have stretched outside the consulates with some Kenyans complaining to Nation that they have had to spend up to two to three days in Washington, DC and in the process incurring huge travel and accommodation costs in order to complete the process.

“This is my second day here at the embassy looking for Huduma Namba. Let me advise those who are planning to come and register that they should be prepared to stay here for at least two days if they are lucky. The process is riddled with poor organisation, lack of enough staff, the fact that one lines serves both issues around Huduma Namba and e-passports,” said Jimmy Onkangi, a Kenyan resident of Dallas, Texas.

Speaking to Mwakilishi, a Kenyan US-based news aggregator, Dr Paul Mukundi, a resident of Baltimore, Maryland, expressed surprise at the chaotic approach at the embassy during his recent visit.

“There were hundreds of people,” he told Mwakilishi.com, adding that “when the embassy cannot anticipate the number of clients they’ll have on any day, they should have a what-if plan for any eventuality.”

Dr Mukundi, who had come along with his wife and two-year-old son, watched as his son and numerous other kids and babies cried for hours in the scorching heat. He said everyone was required to queue on a single line that snaked around the street for all types of services including those requiring visas.

Faith Kavoi, a resident of New Jersey, said she travelled to Washington, DC last Friday only to be told her application for an e-passport had been rejected by the system and was asked to return to the Embassy on Monday. When she returned, she still could not complete the process and had to go back to the Embassy the following day.

But even with the apparent long lines during these last days, its estimated that majority of Kenyans living in the US will miss out on the Huduma Namba due to a general sense apathy.

“Many people are not enthusiastic about acquiring this Huduma Namba simply because the government did not make a compelling case for it. Many people, me included still believe this is just another scheme by some in government to fleece the exchequer,” said Johnstone Mwangi, a Kenyan resident of Dover, Delaware.