Are Satan and the Kingdom of Darkness Being Allowed To Enter Kenyan Sanctuaries? You Decide! 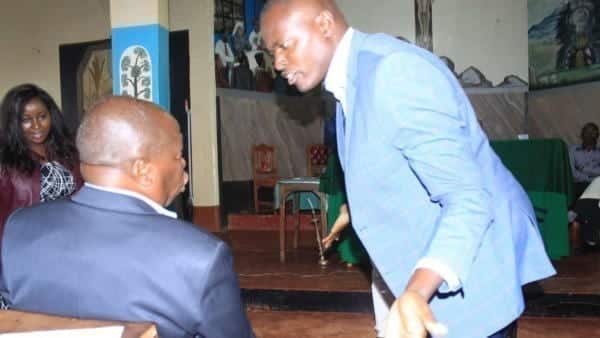 Are Satan and the Kingdom of Darkness Being Allowed To Enter Kenyan Sanctuaries? You Decide!

The reason why Kenyan churches should not allow politicians to stand in front of their congregations is because their authority, though emanating from God, is inclusive of the Kingdom of Darkness, while the authority of the Church is exclusive and mandated absolute within the Kingdom of God. When Church leadership fails in its understanding of Kingdoms and authorities, the people perish and the devil wins!

Recently, Hurricane Dorian destroyed most of the Bahamas. Those on Florida’s East Coast were instructed by the federal government, state government, and the local authorities to evacuate while the hurricane was still out to sea. In some cases there were mandatory evacuations. This confirmed again that even the individual claims of life, liberty, and the pursuit of happiness are not guaranteed: the government has authority for citizens and those within its jurisdiction.

The above statement then leads us to ask the question: What authority controls reality and what we call life? Let me propose that we have five authorities. Each is independent of the other but it affects the other. Above all things and earthly priests, the first identified authority from a spiritual perspective is God. God stands as the absolute authority (above the other authorities). He cannot be questioned because man cannot disqualify that which is claimed by Him. The reason why it cannot be disqualified is because His existence is outside of what we as His created beings can ourselves do without His empowerment and permission. Those like Nietzsche who said that ‘god is dead’, have died, leaving God intact and His claims of Authority unchanged. The Bible thus stands authoritative in its first statement: “In the beginning, God… ” (Genesis 1:1).

Another authority is the Kingdom of Darkness. The definition within human understanding is that mysterious authority that seeks to bring the worst to and in humanity and the world—leading mankind to war, racism, tribalism, family feuds, acts of carnage and destruction. This mysterious power is identifiable mainly in the evil acts such as when Jeffrey Dahmer wooed young people into his Wisconsin home and cannibalized them. His actions were based upon evil. Though we as humanity have tried to take control of this state of decadence, we have historically failed and evidence suggests that we will fail again. The Bible stands authoritative in its assigning evil to Satan and his Kingdom. He has authority in influencing those who do not believe in God: “whose minds the god of this age has blinded, who do not believe, lest the light of the gospel of the glory of Christ, who is the image of God, should shine on them” (2 Corinthians 4:4, NJKV).

Another authority is the Kingdom of Man. The established order of government has been there in all human history; Government of man is an identifiable authority. Within nature, this authority derives its mandate from those who are governed. The chief was declared and was seen to be a chief by his neighbors. No man bestows upon himself authority. Even dictators are assisted by the military in their exercise

of that authority. The Bible declares that this also is derived from God. “Honor all those in authority for there is no authority than that which is given by God” Romans 13:1

Another authority is the Universe and Universal Laws established by God. This authority is independent of man and acts within its perceived power with absolute independence. It is this authority that is constant in its guarantee that the heavenly bodies, including what we call galaxies, are constant in their obedience to the laws that established them and manages their experience. We, as humans, do absolutely nothing to affect their standing. They always have and will continue to be outside of us. Therefore, Hurricane Dorian formed and headed East towards Florida and with unquestioned authority (except as God might intervene) leaves the Kingdom of Man helpless, as we have to wait for the effects. God’s acts as Creator in Genesis declares that he established universal laws were set in motion under the authority given to them by God. “And God said let the earth bring forth . . .” Gen 1

The final authority that exists is death itself. This authority decreed by God initially after the fall of mankind declares man’s claim to life naught and nullifies any authority that man can claim either in his place within the Kingdom of Man and in a man’s own life. The Bible declares this also to be ultimately under the hand of God. “When he had said this, Jesus called in a loud voice, ‘Lazarus, come out!’ The dead man came out, his hands and feet wrapped with strips of linen, and a cloth around his face” (John 11:43,44). Jesus overcame death also when He was resurrected. Paul assigns death independence in His statement, “For he must reign until he has put all his enemies under his feet. The last enemy to be destroyed is death.” 1st Corinthians 15:24ff. NIV

The Church is therefore not an independent kingdom, with independent authority, for its mandate is only functional in Christ. “I will build my church,” means we belong and function subjugated to the name of Christ and the Kingdom of God, of which Christ is the head authority, “All authority has been given to me in heaven and on earth” (Matthew 28:18). Therefore our authority is not independent like the other authorities but is exercised from a derived state. That is why when pastors allow the independent Kingdom of Man, which is inclusive of Satan who is the god of this world into the pulpit, we are violating every spiritual principle and seem to be handing over the Kingdom of God to Satan.

When pastors do this, then the evil in man is displayed and events like the one in the Catholic Church in Muranga is inevitable. In this case then, isn’t Satan the victor? If we must, let us acknowledge the attendance of politicians from the pulpit but reserve the Pulpit to the reading of the Word of God to the world.

Is Satan and the Kingdom of Darkness Being Allowed To Enter Kenyan Sanctuaries? You Decide!