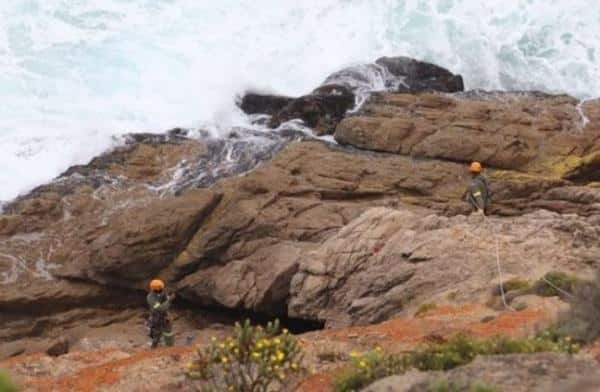 Mum, two children die after car plunges off 300ft cliff into sea: A devoted mum and her two young children are believed to have been killed instantly after their people carrier was driven over the edge of a 300 foot cliff plunging into the sea below.

Heidi Scheepers, 35, and daughter Cuzette, 6, and son Hugo, 2, died as the VW Caravelle first smashed onto rocks then disappeared into the waves.

A huge manhunt had been launched by police in South Africa for the missing trio after they failed to return home as expected from a walk on the beach to have supper with their dad.

Heidi’s husband Ettienne, 36, had spent Tuesday afternoon with his wife and children playing with them on the beach at Herolds Bay near George shortly before the tragedy happened.

But at 6pm they parted company when he went off to check on some properties that they managed in the seaside resort while his wife took the children back to the car park to drive home.

However when the father-of-two who had then walked back to the café they owned in the village to pick up his car and returned home at 7pm he discovered no sign of his young family.

Their detached home on an exclusive golf course is just a short drive from the cliff top car park where his wife of 13 years Heidi had parked their people carrier but there was no sign of the VW.

A huge hunt was launched for the missing family with police fearing they could have been kidnapped but on Wednesday a set of tyre tracks were found which led straight over the cliff edge.

A South African Police source said: “Below the point where the tyre tracks left the road and on rocks right by the sea below there was some wreckage from the missing VW Caravelle.“A helicopter was called in along with the coastguard and divers and then we brought in climbers to abseil down the cliff but it appeared that the car itself had been completely submerged.“

At low tide a tyre was seen so we knew where the wreckage was but the sea was very rough and it was getting dark so we called off the operation until the Thursday morning at dawn.“It became apparent that the situation had moved from that of a rescue to a recovery of the missing woman and her two children which was very emotional for all those involved” he said.

On Thursday afternoon rescuers spotted the body of two-year-old Hugo still strapped into his car seat floating in a gully near the wreckage of the submerged vehicle and gently recovered it.Distraught dad Ettienne was broken the news within the hour as the hunt for his missing wife and daughter continued.

Stormy weather conditions meant rescuers could not get a cable onto the car on Thursday to pull it from the seabed to see if mum Heidi and her daughter Cuzette were still strapped inside.On Friday morning police divers were called in to try and get into the vehicle at the next low tide.

Heidi’s husband and father of the two children Ettienne was said to be “inconsolable” and had been unable to visit the scene at the cliff overlooking the wreckage of the car in the ocean.

Accident investigators are hoping that the recovery of the vehicle will help them understand how the people carrier had come to drive over the edge of the cliff and plunge 100m into the sea.

The police source said: “The car went over the edge of the cliff and we urgently need to know why. Did the car go forwards when it was supposed to go backwards or did the brakes fail? “Did something or somebody force the vehicle to go over the edge? We also of have to try and establish that it was an accident and that there was not an intent to drive the car over the edge.“There are many unanswered questions and it is our job to answer them all,” said the source.

The couple were popular in the village which has only 100 homes and a population of 750 people which more than quadruples when tourists travelling the Garden Route stop over in the summer.

The couple who had been married 13 years had their own company called the Garden Route Management Group and oversaw the renting out holiday homes on behalf of their owners.They also ran the popular Herolds Bay Café near the beach which was popular with the many surfers and swimmers and fisherman who flock to the village for the waves and peace and quiet.

It is believed that one of their two children had special needs and may have had Down Syndrome but friends of the family refused to say if that put extra pressure on businesswoman Heidi.

Husband Ettienne said the family had left their detached home and driven to a nearby car park above Voelklip beach and walked down a path to the sand below at 5pm on Tuesday evening.He was due to fly to Mozambique on Wednesday to see other members of his family while his wife and children stayed behind so had taken them down as a treat before leaving the next morning.

The father-of-two told local media before news broke that the family car had been found at the bottom of a cliff that after playing on the beach he had to go and check on a nearby property.He said: ”It was a property we manage for clients so I went to check it was safe and secure and my wife and children were going straight home from there and then I went back to our café.“I got my car and drove home for about 7pm but they were not home.

We live so close to the beach that it takes only minutes for them to get home in the car and I got worried immediately.“I started phoning all her friends and family but nobody had seen her and I went driving round the streets looking for her car but when it got to 9pm I found no sign and went to the police.”He told local media that he was even more worried as one of his children had special needs.

Police spokesperson Captain Malcolm Pojie confirmed the body of Mr Scheepers’ son had been found and said: “The tragic news was broken to the dad when the boy was found.”We have a full team of rescue personnel here including police divers, the lifeboat, men who have abseiled to the foot of the cliff and a helicopter and I am grateful to them all.”

The weather conditions are not helping us at all and we hope to get inside the vehicle soon and recover the missing people if they are still inside or retrieve them from along the coast.”In 2015 three students from Nelson Mandela University in nearby George died at the same spot when their Toyota pick-up truck went over the 100m cliff in a mysterious accident.