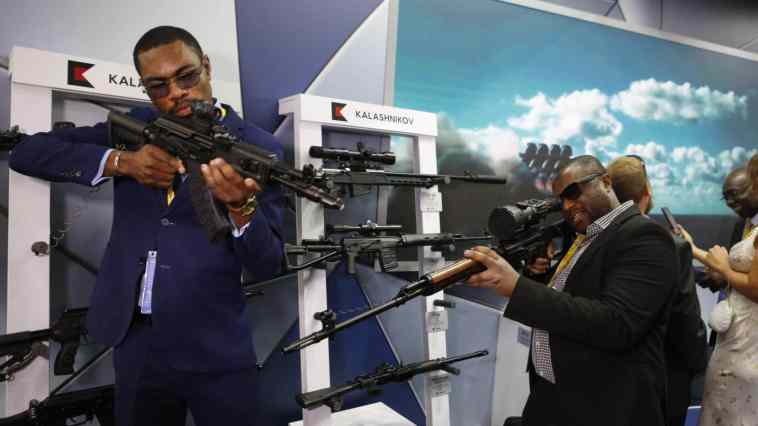 Photos: African Leaders Sampling Russian Riffles Surface Online. This week, thousands of African leaders flocked to Russia in the first ever Africa-Russia summit that promised to discuss political and economic relations worth billions of dollars.

The summit promises a no-strings attached relations, unlike China and the Western world who seem to exploit African countries for their ‘lack’.

However, the leaders seem to be looking elsewhere according to photos poping up online; about the Russian might in weaponry.

Weaponry is the second largest export Russia sends to Africa, after food according to Russian President Vladimir Putin who met the over 3,000 delegates from the black continent.

“We currently export to Africa $25 billion (Ksh2.5 trillion) worth of food — which is more than we export in arms, at $15 billion (Ksh1.5 trillion). In the next four to five years I think we should be able to double this trade, at least,” Putin said.

Russia And Belarus Athletes Banned From Paralympics in in…

The Russian leader, who seems to be in war with former African colonies like France and the UK, promised African countries their ‘independence’ from former colonies.

In addition, Putin offered African cooperation without “political or other” interference. Already, the superpower hopeful is set to sign a military cooperation agreement with Ivory Coast, which has sent a delegation of 70 people to Sochi, including President Alassane Ouattara.

DW reports that in addition to “military and security cooperation” with Africa, Putin also pledged Russian commitment to combat the Ebola virus with aid, and the training of “African cadres” by Russian universities.

“Joint projects are underway in extractive industries, agriculture, healthcare and education,” he said.

Russia’s relation with Africa dates back to the pre-independence period during the  Soviet era, when the country supported independence movements and training government leaders in former Soviet client states such as Angola and Ethiopia.

However, the relation died down after the fall of the Soviet Union in 1991, giving way to China to do business with the continent, cemented by the establishment of Forum on China-Africa Cooperation in 2000.

In the summit, it is reported that Nigeria bought 12 helicopters and signed a deal for training and equipment.

Russia accounted for 39 percent of Africa’s imported arms between 2017 and 2013, ahead of China and US who are also noted as crucial weapon supplier for Africa.

Russia is the second largest supplier of weapons in the world after the US.