On Friday, November 22, Deputy President William Ruto was joined in a feast by Kibra residents at the Bomas of Kenya in Lang’ata, Nairobi. 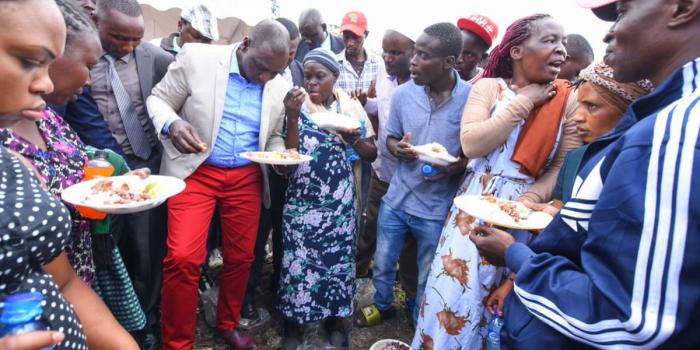 The DP held the feast to express his gratitude to the Kibra residents who voted for the Jubilee parliamentary candidate McDonald Mariga during the Kibra by-election on November 7.

In a video shared on social media platforms, the DP is seen mingling with the residents as he enjoys his food and good conversation.

Some of the residents can be heard shouting, ‘hustler, hustler’ as others are queuing for food, which seems to be in plenty and of a wide variety.

While delivering his speech, Ruto stated that he would not keep off Kibra politics.

“We have learnt key lessons from the Kibra mini poll. Through Mariga, the Jubilee administration will build a church, schools and a mosque,” he promised.

According to the results announced by the IEBC on Friday, November 8, ODM parliamentary candidate Imran Okoth garnered 24,636 votes beating Mariga who managed 11,230 votes, a difference of 13,406 votes.

Mariga had on Thursday, November 7, evening conceded an early defeat when he called to congratulate his opponent.

“Hello boss, this is Mariga, I have called to congratulate you. The race has been fair and I am ready to support you in whatever you need,” admitted Mariga in the phone call.

Imran accepted the early victory as he agreed to work with Mariga and uphold their friendship.

2015 PERSONALITIES: WINNERS AND LOSERS IN KENYA

Sick: Pastor says the ‘Holy Spirit’ led him to have sex with daughter