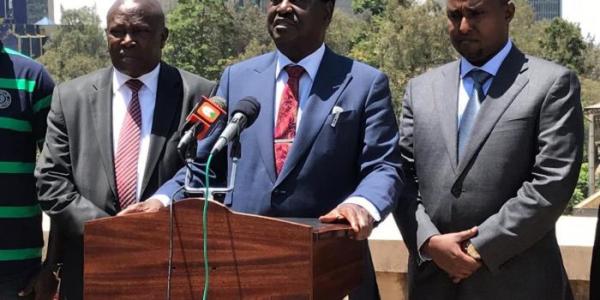 In a video posted by NTV, the lawmaker disrupted the event, forcing Suna East MP Junet Mohamed to pause mid-speech after his chopper’s noise became unbearable.

The disruption came about as Maina Kamanda, who was just arriving at the event on a chopper, circled above the area looking for a perfect place to land. He stole the attention of the crowd and dignitaries at the podium who stared at the helicopter.

Mohamed’s speech was disrupted for roughly 25 seconds and was forced to calm the supporters. “Let him land,” urged the legislator.

While giving his address, the Suna East MP made it clear that the party would not be making apologies over Kibra chaos despite repeated calls by Deputy President William Ruto.

“William Ruto has been making noise since the by-election. The noise he is making is because he is hurting for spending millions in Kibra but never bagging any meaningful votes.

“I am demanding he be arrested for using public funds for the campaigns,” stated Mohamed.

“Lastly, we are not going to issue any apology to the deputy president. In fact, he owes us an apology for the chaos at Ganda Ward that left our supporter dead,” continued the legislator.