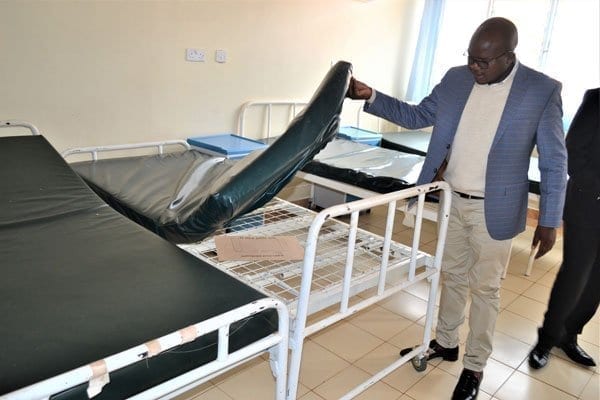 Embu County’s health committee has raised the alarm over purchase of 50 hospitals beds at a cost of Sh50,000 each, saying this is expensive.

On a tour of Embu Level Five Hospital on Tuesday, the team chaired by Muturi Mwombo (Ruguru Ngandori Ward) noted that the beds were made of fabricated metal bars and wire mesh.

The committee, which was on a fact-finding mission, said the total cost of Sh2.5 million was unrealistic.

“The cost of the beds had been inflated. The matter is serious,” Mr Mwombo said as members of county assembly inspected the beds in the newly constructed Badea ward block.

He regretted that a hospital lacking basic drugs and supplies could afford to buy beds at that cost and said it was “painful to see such reckless plunder of public resources”.

Mr Mwaluko, Budget and Appropriation Committee chairman, said Embu residents needed to know how public funds allocated to the hospital were being spent.

“We can’t believe that beds in Embu hospital can cost all that money. The matter should be investigated,” he said, adding the revelation was embarrassing.

He also said materials used to construct the beds were similar to those Jua Kali welders use to make beds for high school dormitories.

The committee’s chair said the assembly would investigate the matter, which he claimed would expose loss of millions of taxpayers’ funds.

The hospitals medical engineer, Paschal Njoka, told the MCAs that the beds would sometimes take two patients, hence their fabrication out of steel bars.

The lawmakers, however, insisted that the procurement was fraudulent and riddled with graft.

The MCAs, who were accompanied by the hospital’s chief executive Dr Daniel Mugendi, inspected construction of an oxygen plant to cover all hospitals in the region.

The leaders also visited the renovated staff for senior hospital personnel to establish whether the county got value for money pumped into the project.

Mr Mwombo warned his colleague MCAS that it would be irresponsible of them to tolerate the misuse of public funds witnessed in the health facility. The Committee commenced investigations immediately and promised to compile a comprehensive report for deliberation in the House.