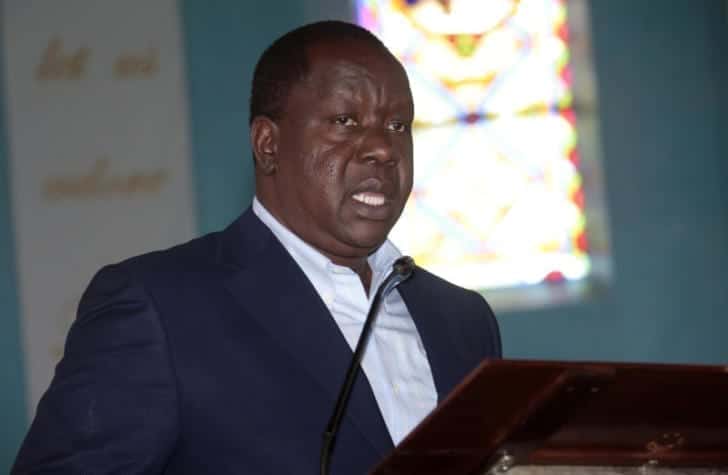 Matiang’i said existing laws had made it difficult for Kenyans who either renounced their citizenship or were exiled to regain their citizenship and acquire Kenyan passport.“We are witnessing a lot of acrimony on an issue everyone thinks is common sense. We are not the ones who passed the laws,” he said in reference to Miguna’s troubles.

The CS said the state had no intention to frustrate Kenyans who wish to regain their citizenship and acquire passports and proposed statutory amendments to facilitate them.

“I’ve written to the Attorney General, on advice from the technical people, to look at our proposals and if in agreement, to forward to parliament,” he said.One of the laws he said should be changed is the Citizen and Foreign National Management Services Act of 2011 which he said contains prohibitive provisions.

He did not, however, say which part of the law he wants to be amended or how the said provision of the law was frustrating those who want to regain their Kenyan citizenship.

“If we fail to implement it we will be hammered. Now that we are implementing, we are hammered,” he said.Through his twitter handle on Wednesday, Miguna claimed that the government is yet to allow him to board the flight to Kenya to attend the burial of his father-in-law.

He claimed he was still in Germany where he was barred from boarding a flight at Frankfurt Airport after the government, allegedly, issued a red alert on him.Earlier, Air France also confirmed that the lawyer was ejected from its flight that he had boarded at Charles De Gaulle Airport to JKIA due to the red alert.

Miguna was first arrested, detained and deported in 2018 after the state claimed he had not re-applied for Kenyan citizenship after the promulgation of the 2010 constitution.The state claimed then that Miguna was a Canadian citizen. On March 29, 2018, the barrister was again denied entry after he tried to sneak into the country via JKIA.

According to Government Spokesman Cyrus Oguna, the lawyer should obtain a valid Kenyan passport from Kenyan missions abroad to be allowed into the country.Matiang’i however said that the laws on Kenyans who want to regain their citizenship and acquire passport were stringent adding that should be reviewed to make them facilitative.

Kamaru the legend: White settlers broke his guitar but didn’t kill his love for…