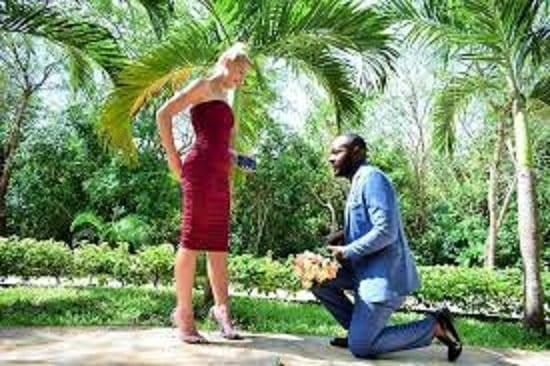 From two suicide attempts to finding love again, Coast-based journalist Tobias Chanji is off the market.

Chanji, who works for KTN, on Sunday shared pictures on his Facebook page of his exclusive engagement to his Newcastle-born fiancée Madison in Diani, Kwale County.

The two met at an airport in Dubai while Chanji was going through a breakup.

“I had a very nasty breakup last year that nearly pushed me to commit suicide twice. I remember I saw at an airport in Dubai, the United Arab Emirates and her eyes warmed my heart,” He told SDE.

When he proposed to Madison, he had gone to Villa Mandari Diani to record a song Why Pay Love with Hate he wrote during his breakup and healing period.

“I was to shoot the video and she asked if she can tag along. I took advantage of the shoot and proposed it. What a nice feeling.”

The two met at a time they were both healing from their previous relationships.

“Madi is a very nice, beautiful lady. She worked as a flight attendant and just like me, was also healing from hurt. Although her story is totally different from mine, she is very understanding and shares the same vision as mine. I, also, really love her tattoos,” he added.