Ugly confrontation in the offing: Miguna Must Produce Valid Travel Documents On Arrival At JKIA

Ugly confrontation in the offing: Miguna Must Produce Valid Travel Documents On Arrival At JKIA. 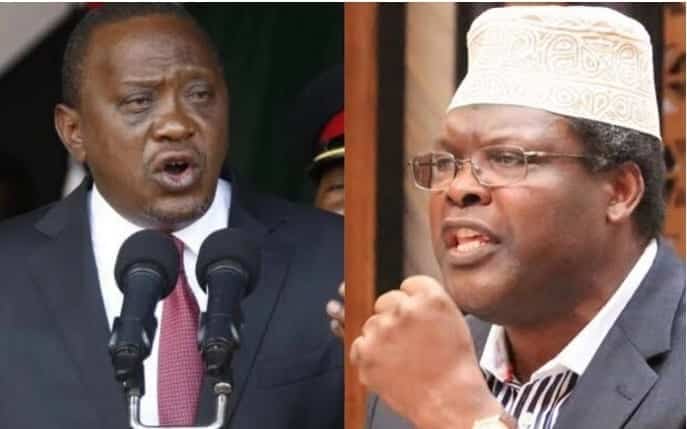 As vocal lawyer Miguna Miguna will be attempting to enter Kenya in a weeks time, the government has maintained that he will only be allowed into the country if he presents valid travel documents.

The self-styled revolutionary, who has in the past been deported to Canada twice announced recently, through his social media handles, that he will be jetting into the country on January 7, 2020.

“All his travel papers must be right and valid,” Col. Oguna told Nairobi News.

“(Then) he will not be denied entry. All his papers must be right and valid as per the travel regulations. We are governed by the rule of law.”

This comes just days after Miguna confirmed that he had booked his flight to Kenya.

416 people are talking about this
Miguna had announced his return on December 17 as January 11 only to change it later over what he termed as “public demand”.

Miguna was forced out of the country on February 7, 2018, after being in police custody for days following his arrest for presiding over former Prime Minister Raila Odinga’s oath as the people’s president on January 30, 2018.

He was deported, for the second time, on March 29 after spending more than 72 hours in a tiny room at JKIA after authorities denied him entry into the country.This is after he refused to submit his Canadian passport at JKIA.

He claimed that authorities wanted him to enter into the country as a foreigner after illegally damaging his Kenyan passport over claims that he renounced his Kenyan citizenship when he became a Canadian citizen.

In preparation for his entry, Miguna called on his legal team, Kenya National Commission on Human Rights (KNCHR), the Law Society of Kenya (LSK) to compel the state to obey court orders on his citizenship and issue him his Kenyan passport.

It goes without saying that another ugly confrontation is in the offing as Miguna is likely not to produce his Canadian passport to enter Kenya. Instead, he’ll demand his Kenyan passport having stated for the umpteenth time that he is a Kenyan citizen by birth.

In a ruling delivered on December 14, 2018, Judge Enock Chacha Mwita noted that Miguna’s deportation was unlawful and in violation of the Constitution.

Justice Mwita further affirmed that the cancellation and the declaration that he was a prohibited immigrant were unconstitutional.

He dismissed the government’s narrative that Miguna is not a Kenyan citizen.

“I find and hold that he did not lose his citizenship upon acquiring a Canadian passport,“ Justice Mwita mentioned concerning his passport.

The High Court also awarded the lawyer Ksh7 million as compensation for the violation of his rights during his deportation to Canada.