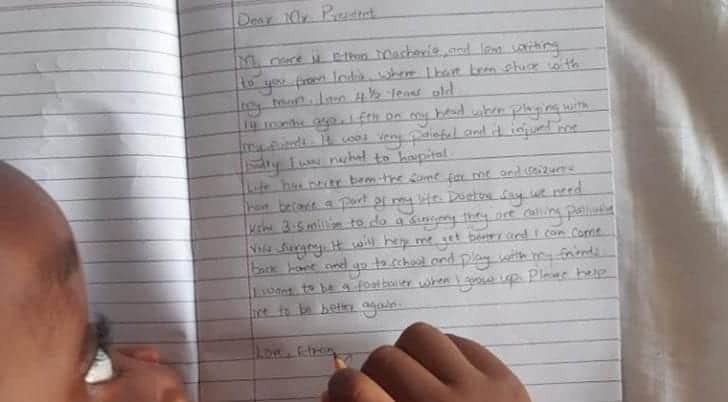 The mother of Ethan Macharia, a five-year-old Kenyan boy who has been stuck in India for several weeks, has penned an emotional letter to President Uhuru Kenyatta.

Veronica Njeri says she is unable to pay for a surgery that he was scheduled to undergo.

In the letter titled: “Dear Mr President,” she appeals to the Head of State and well-wishers to help him raise Ksh 3.5million needed for the surgery.

She reveals that in November 2018, her son slipped and fell while playing at home: he sustained life-threatening injuries on his head.

To make matters worse, he developed violent seizures that put him at risk of grave bodily harm.

Ethan’s life was completely altered as he has never resumed school owing to the frequent number of violent seizures he gets daily.

“My son was leading a normal life until the unfortunate incident that changed our lives forever.

“We have spent the last 14 months trying to raise money for what doctors call a Palliative VNS surgery that’s supposed to suppress his daily seizures as a result of the fall.

“This is the second time we are here in the last 14 months and we couldn’t raise enough money the first time,” his mother Veronica Njeri explained.

According to doctors in India, the VNS surgery is extremely important for Ethan as the seizures are unable to be controlled even with multiple drugs.

This is reportedly an option in only a subgroup of pharmacoresistant epileptic patients, where an epileptogenic focus is localized and amenable to surgical intervention.

Ethan ends the letter saying he hopes his mother will be able to pay for the surgery so that when he heals, he can follow his dream of becoming a footballer.

VIDEO: Martha Karua Speaks on Her Relationship With Uhuru