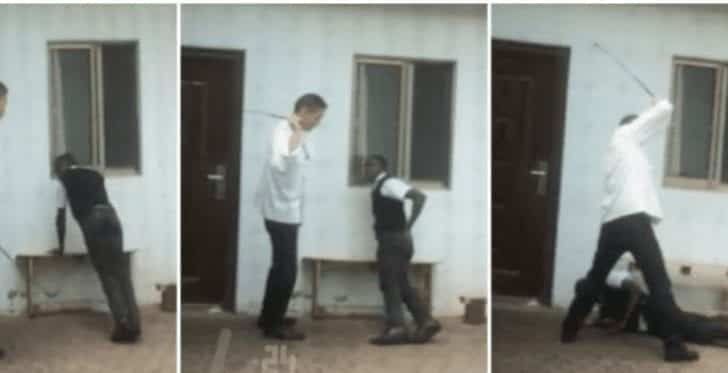 The incident, which happened early last week at Chez Wou, was captured on phone by an insider, who had had enough of the brutality meted out on workers by the “untouchable” boss.

The video clip shows the man, who — K24 Digital understands — is the head chef at the hotel located in the posh Kileleshwa neighbourhood, using a whip to punish a youthful waiter, who is alleged to have arrived late for work.

In scenes that show complete domination by the Chinese officer, the waiter is heard pleading with the head chef to lash him in quick succession so that it minimises the pain he would be subjected to.

The aggressor is heard asking the waiter to reveal which part of his body he preferred whipped.

And, after much preparation and pooling energy from within, the cold Chinese hotel officer lands a heavy lash on the rib area of the waiter, who writhed in pain. That was one of the two strokes he was to receive that day.

And after twisting and turning as he held the lashed body part, the subdued waiter lay on the ground to receive the final stroke that was landed on his buttocks, this time around.

The steward, thereafter, ran towards the hotel premises and joined his colleagues.

“He walks around carrying the whip. He uses it solely in disciplining us. When he goes home, he locks it in the store,” a worker told K24 Digital in confidence.

Simon Oseko, a now former worker at Chez Wou restaurant — who was the victim of the assault incident caught on tape — told us that he endured the beastly treatment for six months, and his time at the eatery came to a premature end recently when he was sacked.

The lead chef sent fear waves among the junior workers to the extent that the staffers feared speaking publicly about their ordeals lest they lose their jobs.

After obtaining the video, K24 Digital sought the chief chef’s response over his alleged involvement in the violation of the workers’ rights.

In a rather shocking statement, he said Oseko had asked to be beaten up so that he could earn Ksh200 from him. According to the chef, each stroke earned the waiter Ksh100. And, because the steward was whipped twice, he gave him Ksh200.

In a recorded audio clip, however, the Chinese suspect told one of our reporters to abandon plans of airing the story, and, in return, he would give the newsman Ksh20, 000. The journalist declined to take his bribe.

A report of the alleged brutality was filed at Kileleshwa Police Station, with authorities saying they are investigating the matter.

Oseko has since obtained a P3 Form from the police post.

By Lenox Sengre and Brian Okoth

ARE YOU NURSE, SOCIAL WORKER, TEACHER, ACCOUNTANT OR A PROFESSIONAL WORKING ABROAD!!