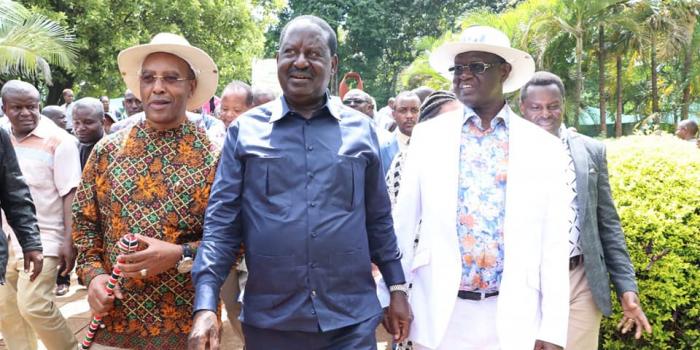 ODM leader Raila Odinga on Friday, February 28, arrived at a Mt Kenya delegates meeting, causing a stir among the attendees.

Some of them wanted him at the meeting while some argued that the discussions were about issues affecting Mt.Kenya, claiming that he was not welcomed.

It was a tough hurdle as the emcee tried to calm down the attendees, who were out of order.

“We need order so that we can continue to listen to Canon Karanja, the person who was giving his views,” the MC is heard trying to calm down the attendees.

“Let us be fair and give the meeting as much dignity as we can,” he continues as some of the participants are heard saying, “Raila hatoki!”

In one instance, a man was heard telling those who did not want the ODM leader present in the meeting to walk out.

“The meeting is for Mt Kenya people and in this meeting, we will only talk on issues affecting Mt.Kenya,” he stated as some supported him.

Delegates had converged at KEMU Grounds in Meru ahead of the Building Bridges Initiative (BBI) meeting that is set to take place in the same county.

They were harmonizing the Central Region Economic Bloc (CEREB) proposals which will take into account regional economic empowerment, gender inclusion, youth and persons with disabilities (PWDs).