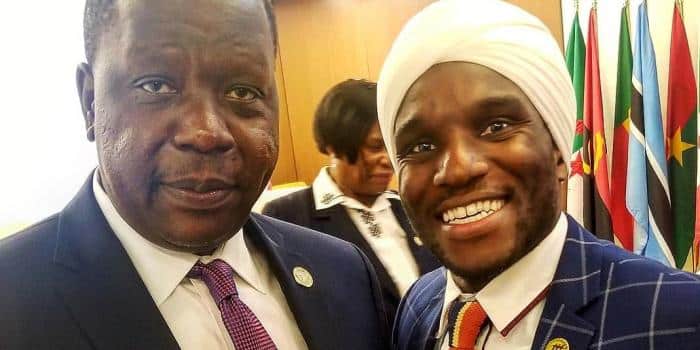 The first thing that stands out as David makes his way into the studio is his stride. It oozes confidence. The certainty of a man who has figured out the ever-elusive ‘why’.

Currently serving as the Public Finance and Youth-to-Youth (Y2Y) Co-Secretary at the World Bank Group, Dr. David Wachira has rubbed shoulders with some of the world’s top leaders such as Hillary Clinton, Michelle Obama, Bill Gates and Former United States Secretary of State Madeleine Albright.

His pristine white turban is neatly wrapped around his head, complementing his turquoise blue blazer emblazoned with some colourful African print.

David walks towards an armless cushioned chair set up in the studio like a man who knows the exact reason why he wakes up every morning.

His aura doesn’t allow you to pass him without at least noticing his exceptional dress-code.

A weirdly unique feature, especially if you realise that this is a man who walks into high-level clearance rooms at the World Bank – you know. Those highly secured rooms where a bullish-looking guard stands at attention and entry requires a special card.

He walks past those like the ordinary Joe would when stepping into a stall at Imenti House.

Don’t let this fool you though, David is a big deal – as Jamaican artist Chris Martin would put it.

Described by his associates as ‘the guy’, it’s easy to see why the outspoken finance expert is revered by many.

Once he steps into our studio, it’s time to try and understand what makes him tick.

We had a whole set of questions ready, but his friendly and open nature quickly takes us into a whole new direction. 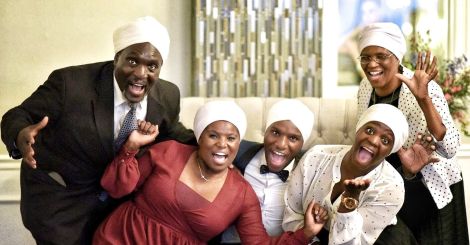 Q. Have you ever experienced any sort of discrimination from security officials or any other authority as a result of wearing your turban?

He chuckles… “Well yeah. This happens in different aspects. In the US, it happens for a different reason as compared to over here in Kenya.”

“In the US, they have no clue what an Akorino is, we are just bundled together in the Arab or Sikh category,” he manages to smile while explaining all this.

“I remember this one time in an airport, I was flying in and a gentleman from the security department told me ‘you have been selected for a random check’.”

“I’m like ok and by this point, I tell myself it may just be a random check. He goes ahead and swabs my hair, checks for various residues and gives me an all-clear.”

“But then, as soon as I moved to another line, another guy approaches me, pulls me to the side and tells me that I’ve been selected for a random bag check.”

“I was like, ok there’s a lot of randomness happening here today, but please go ahead and do it.”

“The bag is taken through those machines and once again I’m given the all-clear after been given a full pat-down.”

“However, just before I move through, he says ‘excuse me sir, I’m sorry but you’ve been selected for another random check’, – at least they’re polite.”

“By this stage, I clearly realise that there’s nothing random about these checks. I go through this process seven out of 10 times at different airports in the US.

It amazes me how level-headed David is when faced with blatant prejudice….that simple example makes me realise maintaining a cool head in the face of adversity must be a key trait for success.

Anyway, back to David.

“In Kenya, the same thing happens more often than I’d care to admit,” he says with a sombre look.

“We have this tendency to put people in certain boxes, like, that’s a watchman and I put him, that’s my household and put him/her or that’s an Akorino and I put him here,” he says while complementing his explanation with gestures.

“Personally, I don’t take offence but I think it’s retrogressive and we need to check that.”

“I remember this one time I was scheduled for a seminar in Nairobi. I was the only Kenyan in a panel of experts mainly consisting of white folk.”

“I was walking a few paces behind the group as we approached the venue. As soon as I got to the door, a no-nonsense looking security guard physically blocks me off with his huge arm.”

“Wewe mukorino unaenda wapi? The group ahead of me heard the commotion and turned back.

‘What seems to be the problem?’ one of them asks.”

“Oh, nothing. I was just informing this gentleman that I was part of the group.”

“The dumbfounded guard realises his error, says a thousand sorries and salutes me as he lets me through.”

“The funny thing is that this wasn’t the end of it.”

“Once I got in, I decided to make myself a cup of tea before we began the meeting.”

“When I was just finished stirring my cup, one of the government officials we had come to meet approaches me and he’s like, ‘pia mimi nitengenezee chai (I’d like a cup of tea too!)’. I ask him what type of beverage he prefers.”

“He says he wants one just like mine. I actually gave him my cup and turned back to make myself another.”

“Believe it or not, some other government official approaches me ‘pia mimi nitengenezee Milo (I want a cup of milo)’ I do just that, look around to see if anyone else needs tea and then make my way to the table.”

“When they saw me take a seat as part of the panel on the World Bank side, you could almost feel them shrinking in their seats as I went on to conduct the meeting.”

“They came around to apologise at the end of the meeting but I just let it slide. As a country, we have a long way to go in terms of eliminating this sort of pattern.”

By this point, I’m just in awe of this great man. Despite going through such scenarios more times than he can count, he still maintains a lively smile, he still remains optimistic and most importantly he never loses his cool.

I need to find my cool.