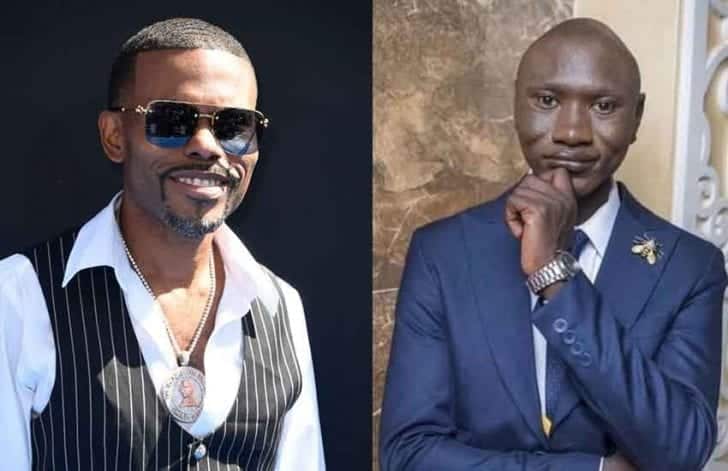 2005 BET Coming to the Stage finalist Roland Powell, better known by his stage name Lil Duval, is under fire from Kenyans over a post he shared of fast-rising Kenyan rapper Stivo Simple Boy.

According to celebrities and the rapper’s legion of fans, Lil Duval – a well-known American figure in stand-up circles, crossed the line by trolling the Tuheshimu Ndoa star as a black smiley face emoji.

“If … was a person,” shared the Florida native on Instagram to sharp reactions on the comment section with many castigating the comedian over the message deemed disparaging to Simple Boy.

“The dude you’re trolling is a Kenyan artist who makes conscious music, he just stays in his lane and does his thing, and that’s why we’re mad Lil Duval,” fired film star extraordinaire, Nick Mutuma.

“Lil Duval this is not funny at all! May you have kids one day that we could use as memes too nkt,” added Namba Nane’s greatest musical export Octopizzo.

“You are what is wrong with this world. Period. You should be ashamed,” stated Wanjiku.

“How can you even say that? He is ours and we are proud of him here in Kenya,” posed online sensation David Oyando alias Mulamwah.

In an interview with Sunday Magazine three months ago, Simple Boy opened up on how he overcame bullying and why he has never allowed negative energy thrown at him over his looks slow or curtail his life.

Simple Boy explained that he is unnerved despite the constant trolls, and, boldly highlighted how while growing up, he was teased and became the mugshot of hate after he released Vijana tuwache Mihadarati in 2017.

“It was worse when I was growing up. Children would make up songs about how ugly I was. They would block my path and call me a squirrel. I am used to my face getting all the attention…God created me like this. What do people expect me to do?” He said.

Riding high with Inauma Lakini Itabidi Uzoee at the time, he underscored that he has over time grown a thick skin.

“I sometimes look at the comment and I have to remind myself that people will say whatever they want about you. You cannot control that,” he added.

A point reiterated by his producer Geoffery Ochieng who pointed out that despite it all, Simple Boy was making a killing from his craft.

“If he is making some money from his art, it does not matter if people are calling him ugly,” said Ochieng.

Erick Matunga, Stivo Simple Boys’ social media manager, on his part, added that the Kibra based star was amassing a following by the minute, affirmed by the rapper’s social-conscious music.

“There are people who are just mean. Fortunately, he also has a lot of supporters and they are the ones who fight the online bullies,” said Matunga.

Stories of Kenyan women used and dumped by foreign men

US, EU have no restrictions for Uhuru, Ruto