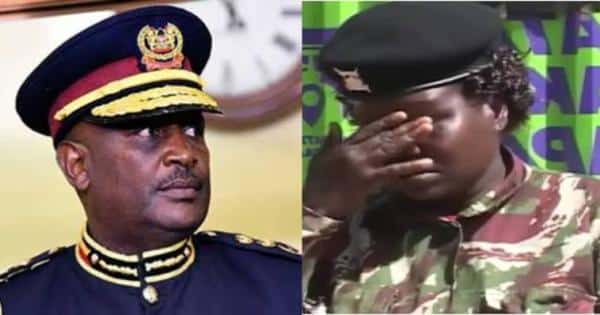 Very Sad: Frustrated Policewoman In Viral Video Sent On Compulsory Leave.  A police officer, who recently hit headlines following an outburst on mistreatment by senior officers, has been sent on compulsory leave.

National Police Service Commission Chairman Eliud Kinuthia, confirmed on Tuesday that the officer identified as Jane Asimizi was sent home to allow the commission carry out investigations on her conduct.

“We have ordered that Asimizi to undergo a psychiatric test to ascertain whether she is of sound mind. What she said on the video last week is not typical of a normal law enforcement personnel,” said Kinuthia.

Last week, after the amateur video went viral, Inspector General of Police Hillary Mutyambai told a local media that he had directed that the officer undergoes a mental examination.

“The woman’s frustrations ought to have been channelled through private avenues. As a police officer, she shouldn’t have gone public to express her anger. I have given instructions for the officer to be taken to hospital [for mental examination]. We are managing the matter without raising hullabaloo about it,” said Mutyambai.

In the video, Asimizi had decried frustrations by her bosses who she accused of deploying her to places where she was not entitled to “incentives and allowances”.

She claimed that her bosses had assigned her a lucrative deal of manning an examination centre in Kakamega only to give her another role in a remote place with no “incentives”.

“I am fed up, and I want my gripe to reach my bosses in Nairobi, and [even the Interior minister] Fred Matiang’i. For the long period that I have served in the disciplined forces, I have never breached any regulations. My seniors can bear me witness. With such unappealing postings, I am only left with my salary to survive on. Special tasks such as exam container-guarding duties often allow a cop to make extra money,” she said.

She alluded that her seniors were tribal.

“I’m so tired and if because of complaining I will be sacked I am ready. If my bosses are doing this to me because am married to a Luhya I am ready to go back to my home in Turkana,” she added.

However, her direct boss, Leonard Omollo, who is the Western Kenya Deputy Commander, dismissed the claims saying the officer had not been assigned to man the said container.

“I would like to state categorically that nobody deployed the officer to guard that exam container. She was only meant to escort the container, we have officers who will then man the exams, said Omollo.

AMAZING! Raila and Bahati Get Down To The ‘Lover Dance’ -PHOTOS/VIDEO

Cord Abandons Merger Plans Ahead Of 2017

Devotion:Have You Missed This Kind Of Opportunity?