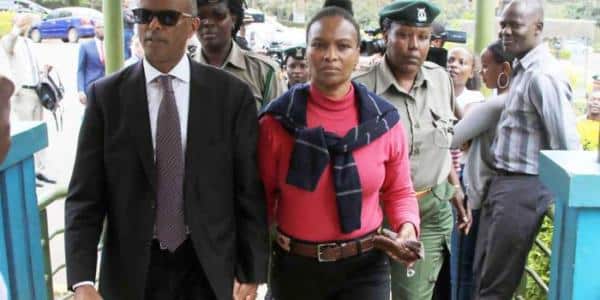 The Directorate of Criminal Investigations (DCI) and the Office of Director of Public Prosecutions were on Monday, March 2, removed from one of Sarah Cohen’s cases.

According to a report by the Daily Nation, the court barred them from participating in the property succession case of the late Tob Cohen citing the fact that they were not dependents of the deceased.

Sarah filed a case seeking to benefit from Cohen’s property owing to her marriage to him.

Speaking after the ruling, Sarah’s lawyer Philip Murgor disclosed that they were not satisfied with the order vowing to appeal the case because the two entities own the matrimonial properties of his client.

Sakaja Presented Himself At DCI Headquarters But Turned Away…

“Today, the High Court ordered that the DCI and DPP be removed from the succession case. We are not altogether satisfied with the ruling because it is our view that as long as the DCI and DPP remain in possession of Sarah Wairimu Cohen, they must be within the proceedings.

“So we are taking up to the Court of Appeal and we have been given a stay of 45 days of the order removing them,” stated Murgor.

“It is our view that as long as they are in possession of the property and capable of handing that possession to somebody other than Sarah Wairimu Cohen, then they must be restrained,” he added.

In January 2020, Tob Cohen’s relatives including sister Gabrielle, filed an application to be enjoined in the case since their deceased brother had listed them as will executors.

In the will that  had earlier been released by the late cohen’s lawyer Chege Kirundi, Wairimu was not listed as a beneficiary of any of the property.

In the will, Gabrielle has been listed as the sibling destined to take over money contained in two local bank accounts.

“His Will bequeathed to me and the other two interested parties his property including a house he had to work hard to build, located on Farasi Lane L R2951/440, measuring 0.3162 hectares on Mugumoini Close in Nairobi,” stated Gabrielle at the time.