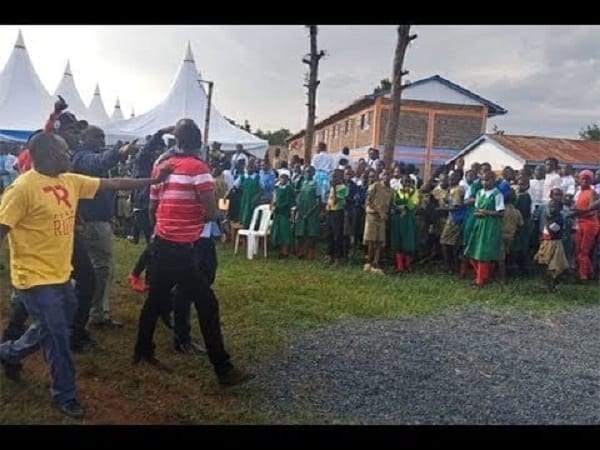 Chaos marred a meeting at Kinyoho Secondary School in Murang’a where Deputy President William Ruto had gone to deliver a school bus Friday.

It started all started when Murang’a Governor Mwangi Wa Iria stormed the meeting with his supporters after getting reports that Tanga Tanga-allied leaders who had accompanied the DP in an earlier function in Kandara had castigated him for his Avocado Processing and Marketing Bill 2020, which they claimed was draconian and aimed at oppressing farmers.

“Since Mr Iria started attending the fake BBI meetings, he has been behaving in a funny manner,” Gatundu South MP Moses Kuria has said. “He must withdraw the bill.” The remarks were echoed by Mathira MP Rigathi Gachagua and Kandara MP Alice Wahome.

Upon hearing about the matter, a furious Wa Iria and his supporters stormed Kinyoho Secondary School but his supporters were denied entry by Mr Ruto’s security guards and local police officers.

When it was Mr Iria’s turn to speak, Ms Wahome’s supporters started chanting anti-Wa Iria and pro-Ruto slogans. “I have a right of reply and this is my county,” the Governor replied. “I have come in peace to respond to the baseless accusations against my bill.”

Mr Ruto condemned the violence and urged Jubilee members to unite and work in harmony, given that their friends in opposition were joining hands while those in Jubilee are embroiled in fights.

“Our friends have come to attack us and its quite unfortunate. I beseech Jubilee leaders to unite and respect each other instead of fights,” he said.

Leaders who accompanied the DP said they will only support BBI if its aim is uniting Kenyans.

Isaac Ruto: What happened to Goodluck Jonathan will happen to Jubilee in 2017