A video of a man in Maasai attire whipping people for failing to do what he called ‘maintaining social distance’ has caught the imagination of many Kenyans.

In the video which was shared on social media on Friday, April 3, a man in a Maasai attire is seen with a whip in hand beating up people sitting close together in opposition to the government’s directive on maintaining social distance.

A keen look by Kenyans.co.ke, has, however, established that the video was simply made for entertainment purposes and was not a true indication of vigilante justice in light of the COVID-19 pandemic.

The video is made by an upcoming Youtube comedian referring to himself as Mbuzi Seller and has a number of videos using the very same theme of satirizing the Maa culture. 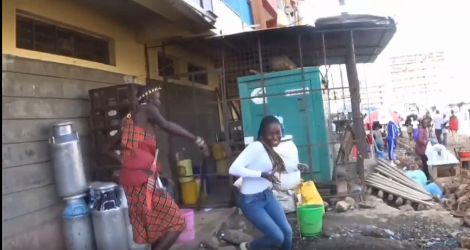 Mbuzi Seller with one of the characters acting out against a grey and blue backdrop in one of the scenes.
FILE

A keen look would also establish that the video was not a random shot on the street but a roughly hewn together sketch spread across several scenarios tailored to incite humour and concern.

In the first five seconds of the video, for instance, a girl in blue jeans and white top is glued to her phone before the man with the whip accosts her and beats her up for not practising social distance.

Another frame shows a young man in a back t-shirt [0.15-0.20] bracing himself and not making any attempt to shield from the whip even when the beating is administered.

After being beaten, he runs away laughing, only to stop not too far away from the perpetrator.

He is again seen in another frame 13 seconds later, in which he is whipped again and runs in the opposite direction.

A keen eye would also establish that there is a change in scenery every time and the victims accosted are in different places thereby betraying continuity negating completely random act. 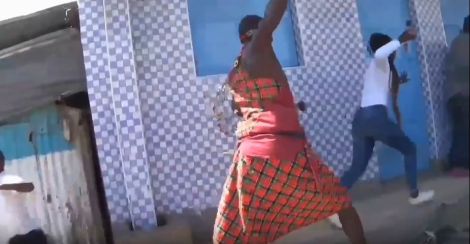 Mbuzi Seller chasing the same character as they act out a scene against a white and blue checked backdrop.

The loud whipping also seems to be eliciting laughter from the victims more than pain and anger which would be a natural reaction in such circumstances.

A longer version of the video also elicits the information that the characters have appeared in many other places staging the same activities.

Social Advocacy for the Mentally and Physically Handicapped

Ezra Chiloba: My tormentors stand with me in private