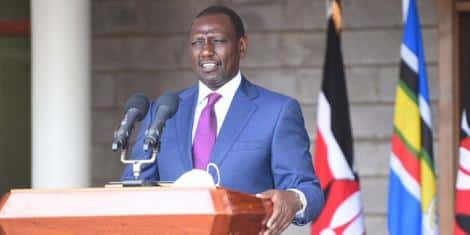 Deputy President William Ruto’s tenure in government is seemingly over and its a matter of when and not if he will resign from government, as President Uhuru Kenyatta has totally isolated him from his administration, as University of Nairobi lecturer and political scientist Herman Manyora says.

Through his YouTube channel on Saturday, May 16, Manyora opined that Ruto had four options on his table if he decided to resign, which would ensure that he and Kenyatta part with dignity.

“His resignation should not be like Jaramogi Oginga Odinga’s who wrote a letter and stated that he would not continue staying in office and enjoy a salary without working.

“He can decide to leave by merely going mute. He can mind his own business as a DP and call his troops to order. Nobody goes to visit him at his Sugoi, Rift Valley home or Karen, Nairobi. He wakes up in the morning and does his work as DP at Harambee House, including reading newspapers, without showing any interest in government,” Manyora stated.

The second card Ruto can pull is by emulating the late Professor George Saitoti, former vice president and one-time Internal Security Minister, by facing Kenyatta and announcing that their relationship was over. However, he will have to seek truce and put the nation’s interest first.

On March 19, 2002, Saitoti spoke at Kasarani after he and the late Mzee Moi, Kenya’s second president, fell out stating “But there comes a time when the nation is more important than the individual. It is because of that consideration and consultation that I say that I shall not offer myself for any post.”

“Ruto will then announce formally that he will continue serving as deputy president and would not run in 2022 and would support the president in his duties,” Manyora stated.

The third option for Ruto is to leave government and resign from being DP and deputy party leader of Jubilee. The DP would base his resignation on his Christian background.

“He would then focus on his businesses, chicken farming, hotel industry and any other,” the UoN analysed.

The fourth option for Ruto would be to resign and leave the government to focus on his 2022 ambitions. He would then organise his troops, give Kenyatta amble time to serve Kenyans without the woes and political dramas.

“Unless he resigns, his lieutenants will be fought from every angle. He must leave. In fact, the best option for him is the fourth option.

“Kenyatta is yet to unleash his full wrath. They underrated Kenyatta. The people working under Ruto know that he is a powerful man, and constant attacks from Kenyatta would affect their psychology and support for Ruto. It would be an embarrassment for the DP,” Manyora warned, adding that Kenyatta has launched a full-fledged war to kick Ruto out of government.

The professor advised Ruto to set his eyes on 2027 and 2032 elections instead.

Wreckage Found: No survivors in FlySax plane crash in the Aberdares