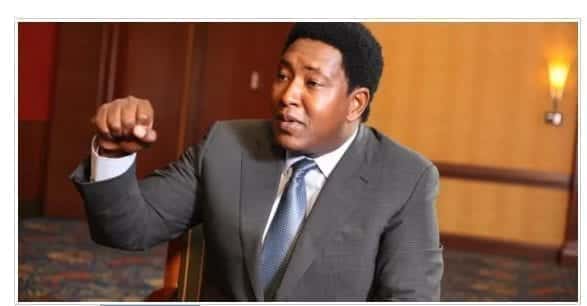 Led by Elgeyo Marakwet Senator Kipchumba Murkomen on Twitter, the DP’s allies stated that the party should accept the outcome of the elections.

“I heard one of them saying a man with one shuka cannot be the chair of the association of dry cleaners. The hypocrisy of ODM stinks to the sky,” Murkomen stated.

He was then backed by Kikuyu MP Kimani Ichungwa who insinuated that an elected chairman in the County Public Accounts and Investments Committee had to be one that favoured governors.

“That must be the Capitol Hill laundromat! The first qualification for chairman is to railroad customers (Governors) to the laundry wawe weupe kama pamba at the right price (so that they can be as white as snow),” Ichungwa weighed in.

Speaking to Kenyans.co.ke, political analyst David Makali stated that it was a win for Tanga Tanga politicians in Jubilee because Ledama’s win would cause a rift in the ODM Party.

“It is part of the ongoing political intrigues. The tanga tanga Jubilee is sharing in glee at anything that seems to cause disruptions or disharmony in the opposite camp.

“I do not have any information to conclude that there was a scheme to defeat the wishes of the ODM but definitely I see a hand of the tanga tanga people in the victory of Ledama,” Makali intimated.

Further, he speculated that the elected leaders from pastoralist communities were united despite being from different parties.

“I think they agreed on one of their own who is a potential member. They are first pastoralist- inclined and then party loyalty second. He is a potential recruit in their camp because he is a pastoralist,” he added.

On Monday, ODM Party wrote a letter soon after Ledama’s win claiming that it would withdraw its membership from the County Public Accounts and Investments Committee shortly after Olekina’s win.

Ledama, who was in the race for the seat against Kisii Senator reacted to ODM’s letter, saying that he would not be shaken.

“Now, what exactly does this letter mean? James Orengo, are they trying to steal my chair position! No way! I am the wrong number to mess with!” he stated.