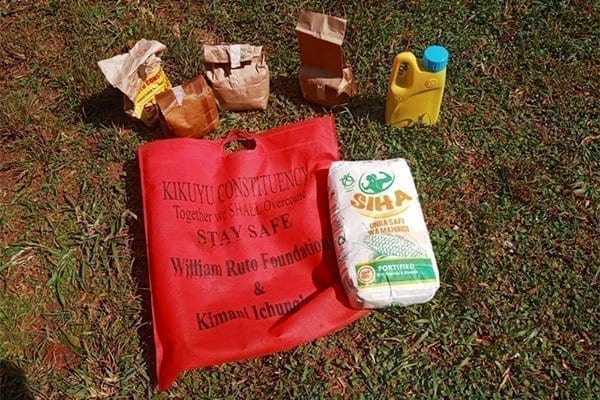 Confusion has arisen over the real source of relief food donated to some Kiambu County residents and which is said to be contaminated, forcing its recipients to return it.

Kiambu County Governor James Nyoro said Monday that 12 people who consumed the food have been rushed to Tigoni, Kiambu and Thika Level 5 Hospitals.

Kiambu County Commissioner Wilson Wanyanga had earlier in the day maintained that the food consumed by some families was distributed by Kikuyu MP Kimani Ichung’wah and a team said to be affiliated to Deputy President William Ruto.

However, Dr Ruto and Mr Ichung’wah on Monday denied involvement in distribution of the ‘bad food’ as it emerged that there may have been different sources of donated food in the county recently.

David Githinji, a resident of Gikambura who received the food donation on Sunday at around 4.30 pm, told the Nation that a Toyota Land Cruiser vehicle arrived and one of the occupants signalled to a pedestrian to come and pick the food. He later sped off.

“It was a pack of cooking oil, maize flour and sugar. We noticed the tea leaves had a sour and funny taste and colour when we used it. Later on one of my family members had a stomach ache. We have just recorded a statement with the police,” Mr Githinji told the Nation.

n official at the Kiambu County’s Health department told the Nation that they had taken samples of the foodstuffs for laboratory tests.

Are William Ruto and Richard Leakey related to the Apes? I…

Some not Happy that ICC lets Ruto skip court appearances

Mr Wanyanga said that 24 people have so far returned the foodstuff.

Mr Wanyanga told the Nation that he was aware of the distribution channels from Mr Ichung’wah’s camp and even went ahead to provide contacts and the names of the churches and pastors who were tasked with distributing the foodstuffs.

He said his office was never consulted or involved in the distribution of the food.

“The pastors were given food to distribute to their followers. People have started returning it to the chief in charge of Gikambura area where the food was distributed,” Mr Wanyanga told the Nation.

“I was not involved in the distribution. Nobody else has distributed food in that area. It came from

Mr Ichung’wah and his team,” he added.

Governor Nyoro, in an update on Monday afternoon, said food donations should only be distributed by the Deputy County Commissioner and Sub-county administrator.

Contacted by the Nation, Mr Ichung’wah did not rule out having distributed food in the said area but clarified that they did so through the help of local pastors but not through unknown individuals.

He said the foodstuffs said to be unfit for consumption and which were branded ‘William Ruto Foundation and Kimani Ichung’wah’ had been distributed by political opponents to portray them in bad light.

“These are fake packaging and the said foodstuff did not come from us. We distributed our food through organised channels that involved church leaders with a list of identified beneficiaries,” said Mr Ichung’wah.

“But what we have gathered so far is that the food which has turned out to be unfit for consumption was being distributed by someone in a land cruiser in Gikambura and, as a matter of fact, it did not come from us,” explained the Kikuyu legislator.