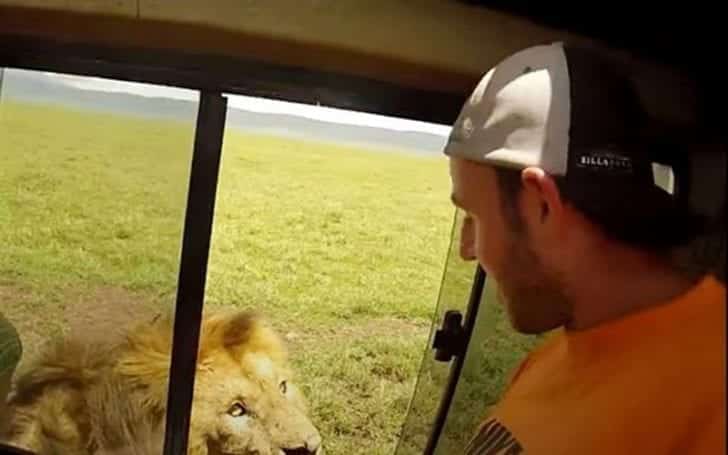 A tourist on safari had an incredibly lucky escape after deciding to lean out of a vehicle to stroke a wild lion. The short clip was filmed on a tour of the Serengeti National Park in Tanzania when visitors must not have believed their luck when the van was able to get within inches of two lions.

With the big cats seemingly happy to mind their own business as people inside the vehicle capture the moment on cameras, footage shows one man sitting within touching distance of the lions with the window wide open.

The temptation proves to be too much for one fellow passenger, who then leans across him to reach out of the window and stroke the lion’s back.

At first, the male lion doesn’t seem to react as the man sitting closest pulls out his camera for another snap, but the mood quickly changes as the lion slowly turns its head to growl.

Panicked voices can be heard telling him to “close the window” as he nervously reaches to slide it back across.

Before he can, the intimidating lion roars angrily into the vehicle as he abandons his attempts and the camera ducks down behind one of the seats. The lion is then shown to be on its feet staring at the tourists as the man scrambles to shut the flimsy window for protection.

It was shared on YouTube by Maasai Sightings with the title ‘Still the dumbest tourist ever?’ and the description reads: “A tourist in Serengeti decided to touch a male lion and almost got her face ripped off. This is a very dumb thing to do and you can easily get yourself killed or banned from a national park by doing this.”

People were left dumbstruck by the clip, with one writing: “Somebody has a brain the size of a flea sitting between their ears.”

Another said: “Lions are freaking strong… that window wouldn’t hold Mufasa back if he wanted to get in.” Watch video below: