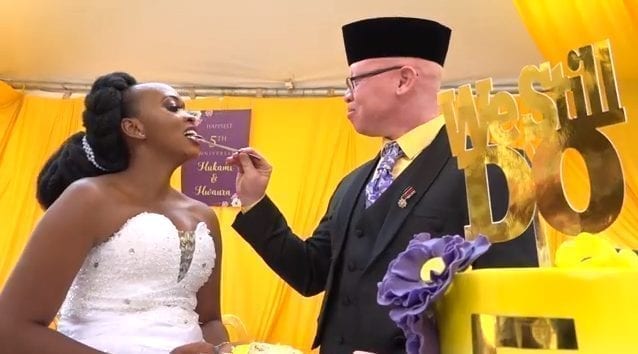 Senator Isaac Mwaura and his wife Nelius Mukami marked their fifth wedding anniversary on Saturday, June 27. The couple’s convoy was stopped by onlookers along the Nairobi Northern Bypass who took photos of the two lovebirds as they stood through the sunroof of an SUV.

Mwaura took to his social media to celebrate their special day in a beautiful photo posing with his wife and President Uhuru Kenyatta. In the post, the senator reminiscences the day he and his wife solemnised their vows in a colourful ceremony attended by close friends and family.

“5 years ago today, Mukami Rwamba Mwaura and I said I do at a colourful ceremony at the Evergreen Park and later on at State House,” he captioned.

Mwaura narrated the challenges they have been through in their marriage and said they have been able to overcome them through faith In God. The lawmaker recalls losing children and thanked God for the gift of their little son.

“We have won many battles, lost quite a number, fought and quarrelled, made up, lost children yet raised one little Njiru, led a normal life like any other, got caught up in the storms, but we have kept the faith and the friendship altogether,” added the senator.

Isaac Mwaura Named Among World Superheroes By A Global…

According to him, marriage has taught him and Mukami a lot of things and among them is that it is all about friendship.

According to the senator, marriage is not for the faint-hearted and it is only successful when the parties involved put God first.

“That marriage is above of all, putting GOD first and walking beside each other in this journey of survival for the fittest. It is never a walk in the park and it is not for the faint-hearted either. Its however not a walk in desert storm, but a mixture of both good and not so good, some kind of sweet chilli. We thank GOD for our Happy 5th wedding anniversary!,” he concluded.

Video:African woman in US rants about relatives back in Africa who keep begging for…

Getting a raw deal: I feel like I’m married to my wife’s sister and…