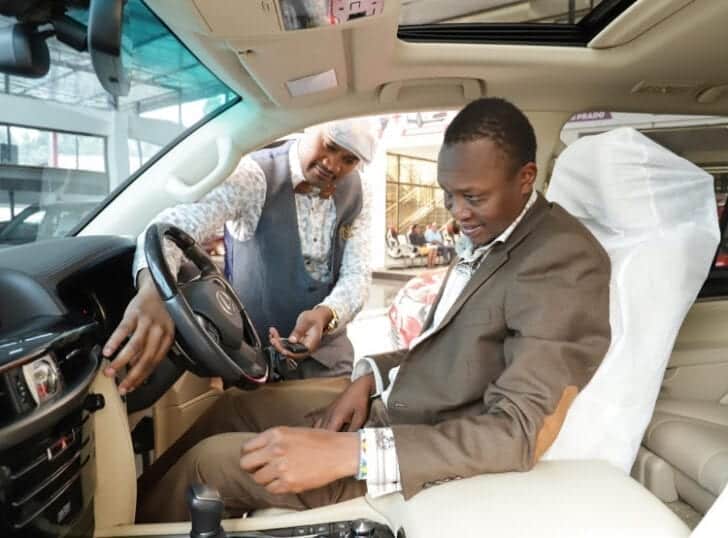 Michael Njogo Gitonga has become a national celebrity due to his close resemblance to President Uhuru Kenyatta.

In a recent interview, he explained how his looks helped him get out of trouble for violating the curfew.

He narrated that one evening he was arrested and taken to Buruburu Police Station, where he was locked up, awaiting arraignment in court.

In the cell, he met his gym instructor Joe Matheri and they became friends.

The OCS noticed his conspicuous looks and asked Michael to introduce himself.

“On observing how close I resembled the president, he became excited and let me go. He said that I was supposed to be taken to court but freed me instead because he knew I had no money,” Michael recalled.

Had he gone to court, Michael would have been slapped with a Ksh 10,000 fine for violating the curfew.

Since the father of three became a social media sensation, brands are likely to approach him for endorsements just like githeri man who became famous during the 2017 General Election.

Popular radio presenter Jalang’o who is one of the biggest influencers in Kenya cautioned companies against using Michael for their own benefit.

He advised that before firms shower him with a variety of deals, they should make sure he is ready to handle the fame and money.

“Before you take him to Maasai Mara, before you give him land and all that followed Githeri Man (Martin Kamtho), make sure you change his life first,” the radio presenter stated.

Despite huge endorsements and rehabilitation, githeri man’s life was marred with reports of him being found drunk and unconsious.

According to a drug and addiction counsellor, Sergeant Moses Kimench, frustrations by various sponsors, people’s perception of him and failure to change his environment are the main factors making Githeri Man unable to quit drinking.

“Even after rehabilitation, Mr. Kamotho went back to his usual living area. There was no follow up from the rehab’s management, and then the man was already frustrated by the various sponsors who had hired him to advertise their products but failed to pay him yet people perceive him as a rich man. He must have turned back to drinking to run away from criticism and questions,” Mr. Kimenchu said.

Governors will not fly flags on vehicles – AG