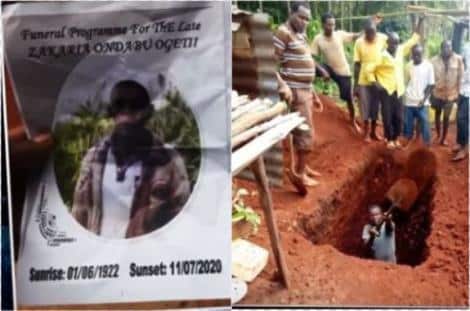 A Kenyan man living in Texas, United States duped his friends into making contributions after he lied that his parents had passed on.

Kenfrey Ondabu is said to have printed fake funeral programs, death certificates as well as tasked his accomplices in Kisii into taking photos of a dug grave.

Coming together to support one of their own, Ondabu’s friends contributed money that would aid in the funeral arrangements.

However, Ondabu’s plan hit a snag when four of his friend’s came back to his rural home in Kisii and found his parents, alive and well.

Shocked by the revelation, the suspects’s father, Zacharia Ondabu, indicated that the family was not aware that his son was conning his friends.

The family is demanding answers as to who printed the death certificate, alleging that a government official might have been involved.

“We want justice to be served and if it means going to court, we are ready,” one of the family members stated.

Ondabu is said to have collided with a local chief for the death certicates to be produced.

According to lawyers, cases of fraudsters lying about their parents death are common, with the intent of them acquiring their property.

“With a fake death certificate, hundreds of property owners risk losing their treasures to crooks,” a lawyer was once quoted saying.

Lawyers believe that death certificates are mostly used by fraudsters to acquire or claim ownership of land belonging to people who are still alive.