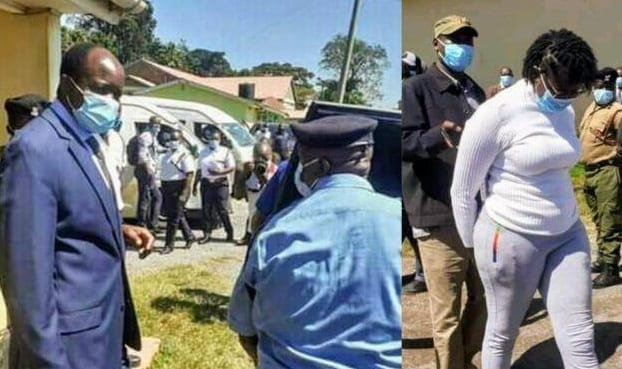 A woman believed to be one of Governor Okoth Obado’s daughter courted controversy on social media after she was caught on camera flipping the middle finger to photojournalists.

The embattled Migori governor and his four children were arrested Wednesday at the EACC offices in Kisii and transferred to Nairobi where they were arraigned on graft charges.

After being grilled at the EACC in Kisii, and as they were being led to a vehicle for transportation to Nairobi, one of Obado’s daughter flashed her middle finger.

The moment was caught on camera and shared widely on social media as a section of Kenyans took offence at the woman’s gesture.

While it was not possible to establish whether it was Susan Scarlet Okoth or Adhiambo Evelyn Okoth who showed the middle finger, NairobiWire managed to unearth the identity of Susan on social media, who goes by @okothsr on Instagram.

In one of her posts, Susan celebrated her father, writing: “Appreciating the men who made us who we are, picked us up no matter how many times we fell down. Who fought to ensure we got all we needed. Those who are our strongest supporters and biggest critics. The strength and resilience combined with the softest of hearts. To all those men who saw our disappointments even before we knew what they were. I salute you all.”

An audit trail revealed that Sh34, 524, 000 was used to purchase a house in Loresho Ridge whose beneficial owner is Evelyn Adhiambo Okoth.

Obado and his children on Thursday denied 28 counts related to misappropriation of funds belonging to the county and were remanded until August 31, when the bail ruling will be delivered.